TORONTO, July 17, 2022 /PRNewswire/ — Scott Dixon took command of the Honda Indy Toronto following the first round of scheduled pit stops in today’s NTT INDYCAR SERIES event, and remained in charge for the remainder of the 85-lap contest to score his first victory of 2022, the 52nd Indy car win of his career, and lead a 1-2 result for Honda, with Colton Herta finishing second. 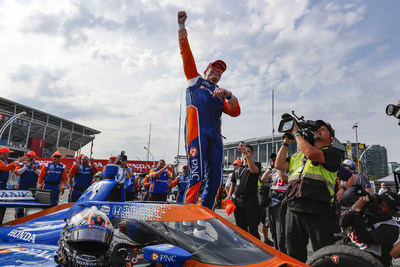 Starting together on the front row, pole qualifier Herta and Dixon led the 26-car field from the green in the return of INDYCAR competition to Exhibition Place in Toronto for the first time in three years, with Herta at the point of those on the primary race strategy, which include the majority of the field.

Dixon just edged out Herta as the pair exited pit lane following the first round of scheduled stops for the primary group, and from there the six-time series champion remained in command, with today’s victory tying him with Mario Andretti for second (and behind only racing legend A.J. Foyt) on the all-time Indy car winners list.

For his part, Herta held off a strong challenge from Felix Rosenqvist in the closing laps to finish second, his best result since winning the Grand Prix of Indianapolis earlier this season.  The Rahal Letterman Lanigan duo of Graham Rahal and Christian Lundgaard also had a strong showing for Honda, with Rahal coming from 14th on the grid to finish fourth; while Lundgaard led the five-driver rookie contingent with an eighth-place result.

Quotes
Scott Dixon (#9 Chip Ganassi Racing Honda) race winner, first win of 2022, 52nd career Indy car victory: “For most of the year, we’ve struggled with understeer, but that definitely wasn’t the case today.  We studied our results at the different tracks throughout this year, and made some adjustments.  It was still a tough drive, but we ended our [non-winning] streak here.  Having the PNC Bank #9 Honda back in the winner’s circle, man it just feels so good.  Massive ‘thank you’ to Honda to get the fuel mileage [we needed] today was so easy.  I feel so lucky to be part of this [Chip Ganassi Racing] group, hopefully we’re back in the title hunt now.”

Colton Herta (#26 Andretti Autosport Honda) pole qualifier, finished second: “Felix [Rosenqvist] was really fast, so I’m glad we were able to keep him behind us.  We struggled a little bit with tire wear at the end, but other than that, our car was amazing. Obviously congrats to Scott [Dixon] for the win, but a pole and a second-place finish, I’m happy with that.  It’s a podium finish and that’s what we need going forward, more consistent results – and we’ll be looking a lot better in the championship.”

Graham Rahal (#15 Rahal Letterman Lanigan Racing Honda) finished fourth: “For us, fourth feels like a win, nothing was given to us today, we earned it.  Even on old tires, we were one of the fastest cars on track. The guys did an unbelievable job with our pit stops today, so congrats to them. From a team standpoint, for us to stay positive this year has been hard.  But this is a good kick-start to our year, with the Hy-Vee [sponsored] races coming up next week [at Iowa Speedway], that will be a big weekend for us; so hopefully we can have a great result there.  For Honda, another strong day, too.”

Wayne Gross (Manager, Trackside Support, Honda Performance Development) on today’s Honda Indy Toronto: “It’s always great to win, but even more so here today with the return of the Honda Indy Toronto, the home event for our Honda Canada partners.  Full credit to everyone at HPD for keeping their focus in what has been at times a tough season for us, and congratulations to Scott Dixon and everyone at Chip Ganassi Racing for an impressive team-wide result today:  including Scott’s milestone victory, and top-six results to keep Marcus [Ericsson] at the top of the championship points chase and both Scott and Alex [Palou] in the thick of the title fight.”

Next
The 2022 NTT INDYCAR SERIES now returns to the USA for the second of four consecutive races weekends, and the only doubleheader race weekend of the year, at Iowa Speedway. The HY-VEEDeals.com 250 takes place on Saturday, July 23; with the HY-VEE Salute to Famers 300 running on Sunday, July 24.