SINGAPORE, Dec. 19, 2021 /PRNewswire/ — According to Coindesk and Bloomberg, on December 17, the Grenada government officially appointed Justin Sun as Ambassador and Permanent Representative to the WTO, authorizing him to represent Grenada at WTO meetings during his term of office. The report revealed that Justin Sun will play a pivotal role in promoting growth of the economy and international trade in Grenada and the Caribbean by introducing digital technology. 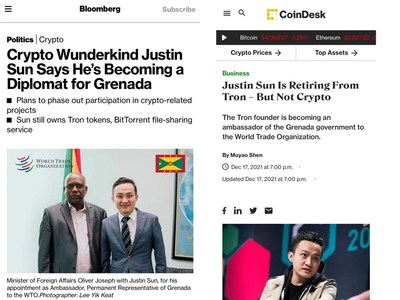 Justin Sun is recently visiting Grenada, Cuba, Barbados, among other countries. He has demonstrated full commitment to powering economic growth by leveraging digital technologies along with his years of experience in the digital world.

As an early comer and practitioner in the blockchain world, Justin Sun founded TRON, one of the top three public chains in the world, in 2018. TRON now boasts over 67 million users and a full-fledged ecosystem, establishing itself as a linchpin in the global blockchain industry.

In addition to the blockchain sphere, Justin is also a heavyweight in science and technology, art, venture capital investment, and charity work, etc. In 2019, he placed a record-breaking bid to win the lunch with Warren Buffett and interacted with Tesla’s founder Elon Musk, among other industry pioneers on cutting-edge topics including technology and digital currency on social media platforms.

Grenada is situated to the south of the Caribbean, with agriculture and tourism as its mainstays. According to the Grenada government, the appointment of Justin Sun, a veteran in the digital field, as Ambassador and Permanent Representative to the WTO, is conducive to the digitization of its trade, investment, and governance.