GLOW® Beverages Inc. Gets Its Game-Day Debut with Ambassador and Star Quarterback Dak Prescott in the Dallas Cowboys vs. Bears Game

LOS ANGELES, Oct. 30, 2022 /PRNewswire/ — GLOW® Beverages Inc. recently debuted its functional sparkling beverage line and announced Dak Prescott and Kylie Jenner as equity stakeholders and ambassadors. GLOW® is proud of their partnership with The Dallas Cowboys quarterback, Dak Prescott who was drawn to the brand because of its unique offerings that fulfil a gap in customer needs regarding hydration. 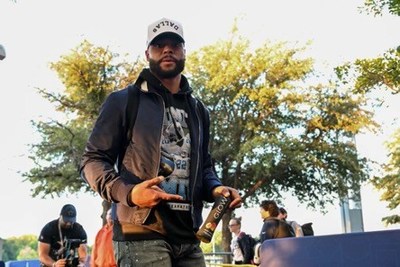 This Sunday, Prescott returned to the field in an exciting game against the Chicago Bears. He chose this special moment to publicly showcase his alignment with GLOW® Energy Sparkling Water. As an equity stakeholder and brand ambassador, Prescott’s commitment to the company is unrivalled, and his decision to showcase GLOW® during this important game further cements his connection with the brand, which will be part of his comeback success on the field.

“GLOW® is an incredible, functional drink, and it tastes amazing. I’m proud to be an ambassador of the brand and a shareholder in the company. LET’S GLOW!” said Dak Prescott.

“With Dak Prescott joining our GLOW team as an equity stakeholder and endorser of the beverage, we are going to GLOW this company up!” said Kev Kouyoumjian, Managing Partner.

Fellow ambassador Kylie Jenner took to Instagram earlier in the week to say she is proud to join the GLOW® team as an equity stakeholder alongside Dak Prescott.

GLOW® white bottles denote a hydration product, while the black bottles in the line boast B12 & green coffee bean extract as the energy source. The product line also has GLOW PH, an Ultra Smooth Alkaline Water with 150+ TDS. The low-calorie treat was invented when founders John Larson and Kev Kouyoumjian noticed a whitespace in the functional beverage category. Historically, sparkling waters have lacked function, and functional beverages don’t offer sparkling (carbonated) versions of their product.

“I formulated GLOW® to support my busy lifestyle. My goal was to create a premium beverage that wasn’t made for an athlete but instead made for someone with a demanding professional lifestyle. I didn’t see anything like that being offered. Additionally, I wanted all-day usage from the time when I woke up until the end of the night. This drink is needed to support a healthy mind & body, and GLOW® does just that. Not only is GLOW® great for your day-to-day life, but it is also multifunctional. It has won awards for taste and best cocktail mixer,” said John Larson, Founder of GLOW® Beverages Inc. “After long days at the office and in meetings, I enjoy going out in the evenings. I only go out for a couple of cocktails, but I don’t want water or soda to be my other option. I want something unique that fits the more upscale environments I enjoy. I also want to have a flavor that I enjoy. GLOW® is premium enough to be sold where I like to spend my evenings. It is hydrating, tastes great, and, most importantly, has functionality with our proprietary blend of herbs, antioxidants, vitamins, minerals, and so much more. It keeps me going all day and into the night. GLOW® was created from a personal need that has become a growing need for those around me that expect function, flavor, and style.”

GLOW® Sparkling Hydration and Energy has no artificial colors, flavors, or sweeteners.  The formulas offer vitamins and minerals to support immune function. GLOW® also has antioxidants, amino acids, and electrolytes. Other functional ingredients include prickly pear and milk thistle.

GLOW® Beverages are available direct to consumers via www.drinkglow.com. The brand can also be found in Costco’s in the Bay Area starting October 18th with the official launch of GLOW® Ultra Smooth Alkaline water. They will be rolling out to Walmart, Ralph’s (Kroger), 7-Eleven, and Albertsons locations in Spring 2023. You can follow @drinkglow on Instagram to keep up with the latest news.