SAUSALITO, Calif., May 17, 2021 /PRNewswire/ — Backed by Platinum Equity and media executive David Nathanson, Game Taco, a premier skill-based mobile platform that enables gamers to compete for fun and cash prizes, has entered into an agreement to acquire WorldWinner, a pioneer in skill-based offerings, it was announced today. WorldWinner is part of GSN Games, a division of Game Show Network, which is wholly owned by Sony Pictures Entertainment. Under Platinum Equity’s new controlling interest, Game Taco and WorldWinner will combine to create a leading premium skill-games platform in the U.S., boasting skill-game IP rights to over 200 branded and generic titles. 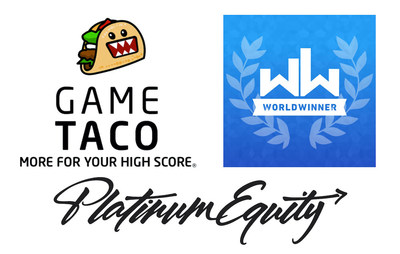 “Our acquisition of WorldWinner is a watershed moment for Game Taco,” said Joshua Barrow, Game Taco founder and CEO.

“Our acquisition of WorldWinner is a watershed moment for Game Taco,” said Mr. Barrow. “David and I have had WorldWinner on our respective radar for years, and with our resources now combined, and with Platinum Equity’s financial and operational backing, we position ourselves to aggressively pursue a much bigger share of the growing, multi-billion-dollar skill-based game industry.”

Like Game Taco, WorldWinner.com and the WorldWinner app offer tournaments for players of all skill levels featuring many of the world’s favorite games including Wheel of Fortune®, The Price Is Right Super Plinko®, SCRABBLE Cubes, TRIVIAL PURSUIT, Two Dots, and Angry Birds. Headquartered in Boston, with team members in Los Angeles, Ukraine, and India, WorldWinner is also recognized for in-house game development, a vast collection of renowned licensed games in a single destination, and a highly engaged community, prizing out more than $1.5 billion since 1999 across both mobile and desktop destinations.

“This investment brings together two complementary businesses under a powerful leadership team with an exciting vision for growth,” added Platinum Equity Partner Jacob Kotzubei. “Platinum’s carve-out experience and operational expertise will help ensure a seamless transition and integration, maximizing the talents and technology of both companies.”

“I have long admired GSN’s stewardship of WorldWinner under Matt and his leadership team. Their expertise has cultivated a portfolio of premium IP that has made WorldWinner a trailblazer in skill-based games,” said Mr. Nathanson. “Game Taco’s existing skill-gaming platform, paired with WorldWinner’s outstanding portfolio, is a formula for exceptional growth and innovation over the coming months and years.”