FROM BOGOTÁ TO MONACO, COLOMBIAN MURALIST MAKES HIS MARK ON ONE OF THE WORLD'S MOST EXCLUSIVE CANVASES WITH VUSE

MONACO, May 28, 2022 /PRNewswire/ — An emerging Colombian muralist has been given one of the world’s most exclusive canvases to bring to life his work in real-time in Monaco, over the FORMULA 1 GRAND PRIX™ DE MONACO 2022 weekend. 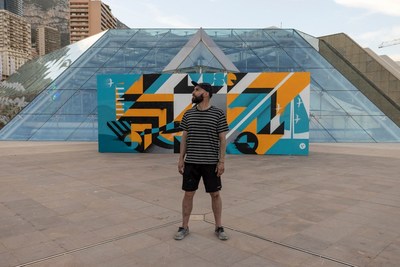 Vuse, the number one global vape brand**, and partner McLaren F1 Team, have today unveiled a mural, created by an artist from Bogotá, Columbia, at one of the most exclusive races in the world, on the Monaco beachfront at the Grimaldi Forum. The mural marks the latest activity as part of the Driven by Change programme, which offers underrepresented creative talent around the globe the opportunity to showcase their passion and work on one of the world’s biggest and most high-profile stages – elite motorsport.

The artist, DAST, is a 38-year-old Colombian muralist who was chosen to create the artwork in Monaco because of his passion for art which has driven his creative pursuits for the past ten years. As a Bogota native, DAST is surrounded by a wealth of inspiration including the diverse geographies and rich heritage of Colombia – something completely opposite to the usual glitz and glamour seen along the Monaco beachfront. These elements inspire DAST to step out of his comfort zone and create murals that explore the relationships between people, places, and spaces.

DAST’s gritty artwork and bold persona have been expertly captured in this live mural, which beautifully juxtaposes with the classical, shiny Monaco cityscape. Chosen for his unique style, embracing geometric shapes, colours, and the relationships that occur in public spaces between buildings, streets and pedestrians to inspire and inform the abstract mural. Featuring DAST’s signature geometric composition, the mural, which DAST painted in real-time, has been inspired by themes of speed, combined with the aerodynamic design of McLaren F1 Team’s car and the vibrant papaya and blue colourway.

DAST, Freelance Artist, comments: “I have been pursuing a career in art and design for over 10 years and opportunities like this are few and far between. When I first started creating my designs, in my home in Bogotá, I never would have thought that one day I would have the opportunity to live my dream of becoming a full-time artist. Having my work showcased at one of the most exclusive Grand Prix™  races and painting the mural in real-time on a beautiful canvas such as Monaco’s beachfront makes the opportunity even more special!”

“These last six months have been truly life-changing. It is an honour to be one of the creatives involved in Vuse’s Driven by Change initiative and I hope to see more creatives like me, take part in this incredible opportunity showcasing their work, passions and values on the global platform of motorsports.”

Driven by Change premiered in December 2021 at the FORMULA 1 ETIHAD AIRWAYS ABU DHABI GRAND PRIX™ 2021, where McLaren unveiled a one-off livery designed by Arabic artist, Rabab Tantawy, celebrating the first time a female artist from the Middle East had been given this kind of opportunity. This year, Driven by Change officially started at the Miami Grand Prix™ where US photographer, Jonathan Walker, captured content around the streets of Miami and at the circuit. Jonathan worked alongside McLaren’s digital content team, gaining valuable experiences, industry contacts and skills.

John Beasley, Group Head of Brand Building, BAT, comments: “We are really proud of the opportunities the Driven by Change initiative has already provided to emerging creatives such as Rabab Tantawy Jonathan Walker, and now DAST! It is great to see DAST’s raw passion, grit, geometric style and unique vision come to life on a completely juxtaposing canvas such as the Monaco beachfront. Our activity with Driven by Change showcases how Vuse is committed to making the dreams of emerging artists a reality.”

The initiative forms part of Vuse’s ongoing ambition to accelerate creative pursuits of underrepresented creative talent across the globe, working with McLaren to identify opportunities to bring their work to life, helping introduce creatives from diverse backgrounds to the masses. DAST’s artwork will be showcased for one night only, on Saturday 28th at the Grimaldi Forum, ahead of the FORMULA 1 GRAND PRIX™ DE MONACO 2022 on Sunday 29th of May.

Rabab Tantawy comments: “I could never have imagined the opportunity that Driven by Change offered me. To become the first artist to have an original piece of art racing on-track was one of the most incredible things to happen in my career. The opportunity truly changed my life. I am excited to be involved in Driven by Change this year, working alongside Vuse and McLaren to continue to change the lives of underrepresented artists, like myself.”

Launching in August, creatives worldwide will have the opportunity to apply to be selected for future Driven by Change opportunities, including showcasing work at an upcoming Grand Prix™, to once-in-a-lifetime exclusive collaborations with The McLaren F1 Team. Specific opportunities, dates and timings for submission will be announced soon.

To discover more about DAST’s story, visit Vuse and DAST’s social channels. Further information on the Driven by Change initiative and how creatives can get involved in these once-in-a-lifetime opportunities will be shared later in the year.

About BAT
BAT is a leading, multi-category consumer goods business with a purpose to build A Better Tomorrow by reducing the health impact of its business through offering a greater choice of enjoyable and less risky products for adult consumers. The company continues to be clear that combustible cigarettes pose serious health risks, and the only way to avoid these risks is not to start or to quit. BAT encourages those who would otherwise continue to smoke to switch completely to scientifically-substantiated, reduced-risk alternatives*. In order to deliver this, BAT is transforming into a truly consumer-centric multi-category consumer products business. BAT employs over 53,000 people and operates in over 180 countries, with 11 million points of sale and 45 factories in 43 markets. The company’s Strategic Portfolio is made up of its global cigarette brands and a growing range of reduced-risk* New Category tobacco and nicotine products and traditional non-combustible tobacco products. These include vapour, tobacco heating products, modern oral products including tobacco-free nicotine pouches, as well as traditional oral products such as snus and moist snuff. In 2020, we had 13.5 million consumers of our non-combustible products, a rise of 3 million on the year before. The BAT Group generated revenue of £25.8 billion in 2020 and profit from operations of £9.9 billion.

*Based on the weight of evidence and assuming a complete switch from cigarette smoking. These products are not risk free and are addictive.

About McLaren Racing
McLaren Racing was founded by New Zealand racing driver Bruce McLaren in 1963. The team entered its first Formula 1 race in 1966, since then McLaren has won 20 Formula 1 world championships, more than 180 Formula 1 grands prix, the Le Mans 24 Hours at its first attempt and the Indianapolis 500 three times. McLaren Racing currently competes in Formula 1 globally and INDYCAR in the US.

The team is contesting the 2021 FIA Formula 1 World Championship with Lando Norris and Daniel Ricciardo, and in the 2021 INDYCAR Series with Arrow McLaren SP drivers Pato O’Ward and Felix Rosenqvist. McLaren was the first F1 team to be certified carbon neutral ten years ago and has successfully retained the Carbon Trust Standard Award, most recently in February 2021. They were also the first team to be awarded the FIA Institute’s Environmental Award in 2013, which they have consistently maintained at three-star level.

In 2022, McLaren Racing will enter a new category of motorsport when it enters a team into Extreme E, the innovative all-electric off-road racing series that highlights the impact of climate change.

Born in 1971 in Cairo Rabab Tantawy grew up watching her mother draw and create. Although she did not pursue an artistic career from the get-go, Rabab always kept an interest in the arts and taught herself different techniques, ranging from very traditional mediums like oil painting to modern ones like spray-paints.

When Tantawy decided to dedicate herself to the arts she got involved in several exhibitions while also actively pursuing street art.

Working with a multitude of mediums the artist created a playful approach to the otherwise serious concepts that ground her work. Her biggest focus is on union, community, and heritage.

While often we can see artists approach these subjects from a political point of view, Rabab tries to bridge the gap and render these subjects through the lens of universality.

Rabab is an intuitive artist. She doesn’t work with preliminary sketches; she uses the canvas as a support for direct download. There’s no expectation for a final product. In a way the product is the process of creation itself.

Line and colour are the pillars of Tantawy’s work. Be it abstract or figurative the artist’s work starts from line. The lines function as a skeleton, informing the whole process of the artwork in the making. Be it soft flowing lines or strong angular ones, this step sets the rhythm of the work. While a lot of artists are choosing to work with limited colour palettes, Tantawy switches from classical earthy colours to strong neon colours in the same series with the same ease she switches between mediums.