WASHINGTON  , May 12, 2022 /PRNewswire/ — Today, the Center for Consumer Freedom launched a six-figure advertisement campaign with a full-page advertisement in the New York Post raising awareness of the ultra-processed ingredients in many fake meat products. The advertisement will also run in the Wall Street Journal on Monday. See the advertisement here. 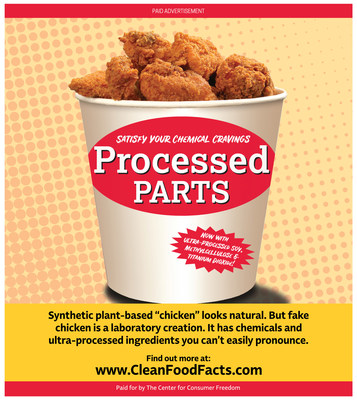 The advertisement follows Beyond Meat’s dismal Q1 earnings report showing that Americans are quickly losing interest in novelty fake meat products. The fake meat industry leader reported a net loss of $100.5 million in Q1 in an announcement today – with its stock heading lower than its IPO price for the first time.

Will Coggin, managing director of the Center for Consumer Freedom, released the following statement:

“The ‘novelty’ of fake meat is wearing off. Processed chemicals aren’t healthier substitutes for natural products.”

To learn more about all the processed ingredients in fake meat, visit CleanFoodFacts.com.