LAKELAND, Fla., Aug. 1, 2022 /PRNewswire/ — Florida Southern College broke ground today for the Adams Athletic Performance Center, the newest building to be constructed on campus. Named for Trustee Robert J. Adams and his wife, Ginny, of Lakeland, Fla., the Center will be crucial in recruiting and retaining talented student-athletes. 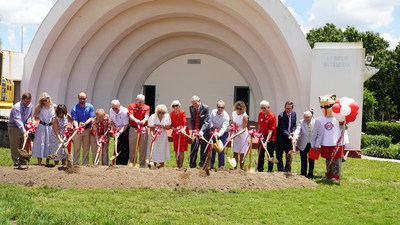 Designed to provide approximately 16,000 square feet of additional space for the College’s NCAA Division II athletic programs, this facility will impact over 550 student-athletes on campus.

The Adams Athletic Performance Center will provide a 5,000 square foot varsity weight room, a 40 person theatre for film review, a conference room that overlooks Lake Hollingsworth, as well as an academic center. The facility will also include office suites for women’s and men’s basketball, as well as women’s and men’s lacrosse, while also providing a state-of-the-art women’s lacrosse locker room.

“Bob and Ginny Adams have taken a leadership role with their transformational gift to the College to support our athletic programs” said Anne B. Kerr, president of FSC. “Together with their son, Joel, and his wife Kelly, we can now better support our student-athletes as they work towards their next national championship. FSC has 30 national championships and is excited about continuing our scholar-athlete winning tradition.”

This unique space has been designed by architect and Frank Lloyd Wright scholar M. Jeffrey Baker of the firm Mesick Cohen Wilson Baker of Albany, N.Y. Mr. Baker has been the lead architect for the College’s restorations of Wright’s historic structures. His original designs for the FSC campus include the Sharon and Jim France Admissions Center (2018) and Carole and Marcus Weinstein Computer Sciences Center (2021).

Rodda Construction of Lakeland will build the new Adams Athletic Performance Center and the College anticipates opening the space in the spring of 2024.

“There is such intense competition not only to attract athletes, but to keep them here,” said Bob Adams, shortly after the groundbreaking ceremony. “I am confident that this project will be huge jewel in the future of Florida Southern athletics.”

As a Trustee of the College, Bob Adams has served on and chaired various committees, including the intercollegiate athletics committee. He was inducted into the Florida Southern College Athletics Hall of Fame in 2011, and has been unwavering in his support. Together with his son Joel ’93, a Distinguished Alumnus of FSC, they founded Highland Homes in 1996, with a foundation of quality, excellence, while delivering the most satisfying home buying experience on earth.

Founded in 1883, Florida Southern College is the oldest private college in the state. The College maintains its commitment to academic excellence through 70+ undergraduate programs and distinctive graduate programs in business administration, education, nursing, and physical therapy. Florida Southern has a 14:1 student-to-faculty ratio, is an award-winning national leader in engaged learning, and boasts 30 NCAA Division II National Championships. Florida Southern is ranked at #8 among the “Best Regional Universities in the South” by U.S. News & World Report in its 2022 “Best Colleges” guide and is included in The Princeton Review’s 2022 Best 387 Colleges guide and the “Fiske Guide to Colleges 2022.” The 2021-2022 Colleges of Distinction guidebook praises Florida Southern’s AACSB accredited Barney Barnett School of Business and Free Enterprise alongside the College’s School of Education and its Ann Blanton Edwards School of Nursing and Health Sciences. Poets&Quants, U.S. News & World Report, Fortune, and The Princeton Review further laud the Barney Barnett School of Business and Free Enterprise and the Ann Blanton Edwards School of Nursing and Health Sciences as foremost programs in the nation for business and nursing education. Home to the world’s largest single-site collection of Frank Lloyd Wright architecture, FSC has appeared on The Princeton Review’s top 20 “Most Beautiful Campus” national listing for 12 consecutive years. Connect with Florida Southern College. 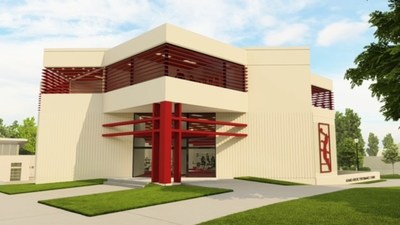