SANTA FE, N.M., Oct. 5, 2022 /PRNewswire/ — The New Mexico State Police Department has settled a sex discrimination lawsuit brought by its first female pilot, LeAnne Gomez. The department denied any wrongdoing, but agreed to pay $750,000 to resolve Gomez’s claims that she was consistently denied opportunities for training and career advancement while enduring a hostile work environment because of her gender. As a result, Gomez has created a platform for solutions-based advocacy to workplace conditions affecting people of color, women, and members of the LGBTQ+ community. 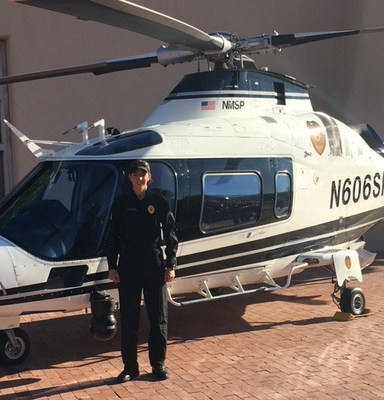 Gomez, who was employed as an NMSP aviation officer and pilot from July 2015 to March 2019, filed her lawsuit in 2020. In it, she outlined a pattern of discrimination, harassment and retaliation that commenced soon after she was hired. At the time, Gomez was a commercially certified helicopter pilot and qualified law enforcement officer who expected to receive the additional training she needed to perform police missions. The department had previously provided such training to male candidates with no prior flight experience.

Instead, according to the suit, Gomez received inconsistent instruction from a supervisor who described one of their first training flights as a “$2,000 date.” At an industry conference, the same supervisor told Gomez that he would be telling everybody that they were married because she was “drawing too much of a crowd,” the filing states.

Gomez says that after she objected to his behavior, she was subjected to retaliation that damaged her professionally, financially and emotionally. She says she was denied the training and flight time she needed to progress as a pilot and received lower pay as a result. Members of the Air Section continued to exclude her from team meetings, trainings and missions while telling her “If you don’t like it, leave and fly somewhere else,” Gomez claims. Meanwhile, Gomez was the only member of the Air Section who had to ask permission to attend team briefings. For more than three years, she used the chain of command to notify the department of the discriminatory treatment and seek the training she deserved. The filing alleges her requests and reports went nowhere.

According to the filing, the embedded culture against women was incessant — during the academy, Gomez was subject to lewd videos and a sergeant called women “bleeders.” There were constant comments claiming that underperforming males were “like girls.” Her flight trainer incorrectly indicated that she was not strong enough to perform a required emergency procedure in the helicopter because she was female, according to a deposition. The complaint outlines a barrage of demeaning, harassing and disparaging comments and events.

Gomez says she was ultimately forced to resign to protect her mental health, having lost almost four years of career progression as a pilot and in no position to start over. While the settlement cannot replace the sacrifice of her dream career, she is using this opportunity to call attention to the persistence of discriminatory and toxic cultures in workplaces including NMSP. Gomez wants to make contact with businesses and individuals to help design and implement solutions-based training, consulting, structural changes and assistance for those who want to improve workplace culture. To find out more or get involved, you can contact LeAnne here.

“Everyone suffers and morale plummets when there are human rights issues in the workplace. Having diversity uncovers biases that aren’t apparent without it,” Gomez says. “Solutions exist to these issues, and I am going to find and implement them. Culture issues are affecting businesses’ ability to hire and retain workers, they reduce productivity and ultimately, affect the bottom line.”

When asked about the future of her former agency, she replied, “Entities need to understand that the ‘problem’ is not gone because the individual that was a catalyst for uncovering the problem is gone. Creating an inclusive culture in the context of diversity may seem expensive at first because it can result in punitive measures for tenured employees, but nothing is so costly to a company or agency as willfully cultivating a toxic culture.”

To view the details of the case, visit here.