LONDON, Oct. 20, 2022 /PRNewswire/ — With just 30 days to go the World Cup, many thoughts are turning to how their country will perform at this year’s World Cup but also look back fondly at previous iterations of the tournament. 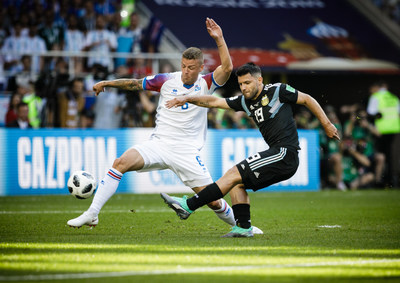 The World Cup has always been a stage that has created and cemented legendary status, and Sergio Aguero, the former star striker for La Albiceleste has been sharing his thoughts on the players and moments that have united his nation, and his expectations for the current team as they prepare for another memorable campaign.

What do you think to Argentina’s chances at the upcoming FIFA World Cup in Qatar?

"Well, going into this World Cup, Argentina is looking very good. They’ve looked strong since Lionel Scaloni took over as head coach. He’s tweaked the system Argentina had been using for years. Argentina was always a team that liked to have a lot of possession and attack a lot.

In their new system, the new coach doesn’t necessarily want them to have so much possession, but rather he wants them to be much more organised, and that’s why Argentina are now in much better shape than at previous tournaments.

So, I think Argentina are going to be very strong, but we always like to stay calm and keep working towards our goal. I don’t know how players from other countries experience it, but when Argentina are playing the first match in the World Cup, it’s at the forefront of our minds that the entire country is watching.

I think any country coming up against Argentina is going to have a tough time."

Argentina has produced a lot of icons of this tournament. Who inspired you and the country the most?

Well, yes, Argentina has always produced great footballing icons. We all know Maradona he was a such an icon in Argentina, for all of us, since we were young, especially when it came to World Cups.

Maybe there weren’t so many of us who got to enjoy what he did at the clubs he played for, but when he played for Argentina at World Cups or any tournament organised by FIFA, I don’t know how to explain it. It was like Argentina was his number one club. That motivated everyone in Argentina to put on an Argentina shirt and support the team for life.

What are your most important memories from the World Cups you’ve played in?

"To be in a World Cup, with everything and the way it’s organised and what a World Cup is like, the truth is it’s an experience you’ll never forget. I’ll always say to everyone that what FIFA does at the World Cup is something that, in my view, can’t be repeated anywhere.

As for my top memories. Well, my first World Cup, it is something that every player dreams of  – getting to share it with Messi as well is something I’ll always remember.

Then, in Brazil we performed so well in the World Cup. From a football perspective, that World Cup didn’t go as expected for me, due to many different factors, where I’d been struggling that year, but mainly with physical problems. So, the only thing I want to remember from that World Cup in 2014 is the people and the group that came together during that World Cup.

And in the last World Cup, I think what I’ll always remember is my two goals, the last two goals I scored. I think that’s the most beautiful memory and one I’ll never forget for the rest of my life because the impact that FIFA World Cups have on someone’s career is something that can’t be repeated.

Then managing to score my first goal at a World Cup. In the end, I went on to get another one, but I’ll always remember those two goals at the World Cup in Russia."