OTTAWA, ON, Nov. 25, 2022 /CNW/ – Commonwealth Sport Canada (CSC) is proud to announce this year’s recipients of the Canadian Commonwealth Sport Awards. The awards for Sport Excellence go to Justina Di Stasio (athlete) and Ryan Mallette (coach). Both awards are a recognition and celebration of the individual’s outstanding contribution to Team Canada at the 2022 Commonwealth Games in Birmingham, England. 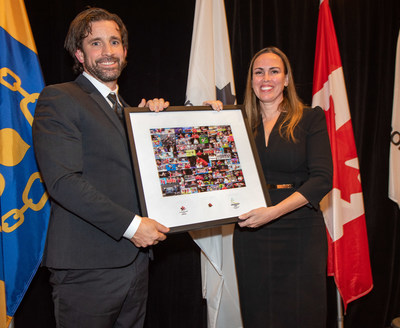 The Sport Excellence Athlete Award celebrates outstanding athletic performance of individual athletes, an entire team, or an individual athlete within a team sport if their contributions are exemplary and warrant special recognition. The 2022 winner of the Athlete Award is Justina Di Stasio. Di Stasio was the 2022 Commonwealth Games Gold Medalist in Women’s 76kg Wrestling and a multi-time continental champion. Di Stasio was also a medalist at the 2015 and 2019 Pan-American Games. Di Stasio is now turning her attention to her goal of qualifying for the 2024 Paris Olympics.

“While Di Stasio is a leader on the mat she is also one off,” says Darren Matte Manager, Marketing and Communications at Wrestling Canada Lutte. “She is well respected by her teammates and coaches and is always willing to help them in their training. She recently earned her teaching degree and has begun working as a substitute teacher in the Coquitlam School District. In addition, she is an assistant coach with Simon Fraser University’s Women’s Varsity Wrestling Team.”

Di Stasio is proud of her indigenous heritage and this year is set to receive a pair of awards: the Tom Longboat Award – which recognizes Aboriginal athletes for their outstanding contributions to sport in Canada; as well as a Premier’s Award for Indigenous Youth Excellence in Sport – which celebrates the outstanding achievements of Indigenous youth athletes throughout the province of B.C. Justina is a leader on and off the matt and beacon of the Commonwealth movement.

The Sport Excellence Coach Award recognizes and celebrates outstanding coaching performance of an individual or coaching team. This Sport Excellence Coach Award is bestowed on Ryan Mallette, serving in the current role of Performance Head Coach at Swimming Canada’s High-Performance Centre. Mallette worked with Team Canada on their preparation for the Commonwealth Games and was part of Canada’s Olympic staff in Tokyo. Mallette is a true mentor as per the values of the Commonwealth Sport movement.

“Ryan provides leadership and excellence in coaching through his dedication to the development of High-Performance Swimmers in Canada,” says Ahmed El-Awadi, Chief Executive Officer at Swimming Natation Canada. “The performances of the Swimmers he has had under his tutelage performed exceedingly well at the Commonwealth Games – Birmingham 2022 lead the way in medal count and broke two World Junior Records, and three Commonwealth Games Records.”

“We are proud to recognize through the Sport Excellence Athlete and Coach Award the great contributions these award winners have made,” says Richard Powers, CSC President. “They have not only demonstrated great leadership but are mentors and role models in their sport and community.”

For further information on the Canadian Commonwealth Sport Awards, their categories and previous award recipients: https://commonwealthsport.ca.