DALLAS, March 30, 2021 /PRNewswire/ — Republican Congressional candidate Dan Rodimer addressed smears using a selectively edited clip of two campaign ads from two different elections in a recently aired clip-on Erin Burnett’s Out Front on CNN. Rodimer brushed aside the false accusation that he had changed his voice and pointed out he had actually lost his voice.

Rodimer pushed back saying, “In regards to my voice, it’s gone. It’s been gone for the past three weeks. Between the two videos that they put back-to-back. If you look at them, they were selectively edited. If you watch the whole thing, you’re going to hear my voice. It’s just like it is right now.”

The campaign has now asked the Washington Post, MSNBC, The Huffington Post, The Independent, Upproxx,Talking Points Memo, Raw Story, Second Nexus, and Mediate to update their articles to include Rodimer’s response to the edited clip of his two campaign ads.

CNN aired the almost 5-minute clip with Rodimer saying, “Send Big Dan to Congress. I know how to handle Nancy Pelosi and stop her b*****t.” The cable network also published online Rodimer’s response to criticisms that he moved back to Texas to run for Congress, saying: “You know, we have an old saying here in Texas — ‘I may not have been born in Texas, but I got here as fast as I could.’ And that’s why we came back.”

His bull riding campaign video went viral amassing over 2 million views and was called one of “the most memorable political ads of the year” by the National Review.

Rodimer also addressed whether or not he rode a bull “Did I ride a bull? Yes, I actually stayed on for 11 seconds. We didn’t get the full filming of it. Yeah. We had other people jump in to be body doubles.”

The Rodimer campaign says that “the video was put together to get people excited about politics. The campaign is receiving a lot of local support from people that have seen the video.”

Rodimer previously went to the border to discuss his Angel Act, his plan to codify Trump’s Remain in Mexico policy into law to stop illegal immigration and keep Americans safe. He has expressed that the act will prevent future Presidents like Joe Biden from reversing Trump’s effective, America first immigration policy.

As part of their community outreach, the Rodimer campaign will be holding a free wrestling themed event in Mansfield, Texas, called “Wrestler for Your Rights.” It will be held on Saturday, April 17, at 4 PM CST at 110 S. Main St. Mansfield, TX 76063. The event will feature Dan Rodimer, CD6 Candidate, and Mayor of Knox County Glenn “Kane” Jacobs and other former WWE stars.

Learn more about Dan Rodimer and his run for the Texas’s 6th Congressional district (TX-06) by visiting his website at danrodimer.com 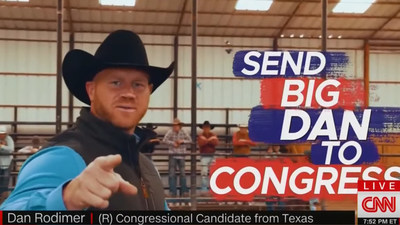