BIRMINGHAM, Ala., July 22, 2022 /PRNewswire/ — Dakota Lithium, a U.S. battery manufacturer founded in 2008, has signed a three-year partnership with B.A.S.S. as a premier sponsor of the Bassmaster Tournament Trail and the Official Lithium Battery of Bassmaster through 2025. 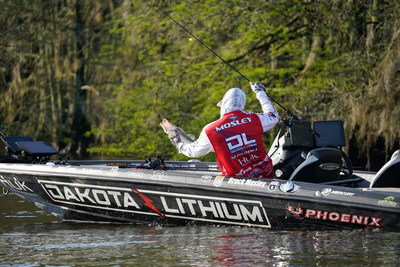 “I was the first Bassmaster Elite angler to use Dakota Lithium batteries and have been on the team from the beginning,” said Mosley, who has notched five Top 10 Elite finishes in the past two seasons. “It is truly amazing to see how far they have come and to see them sponsor the 2023 Bassmaster season.”

“When you combine the best lithium battery and the best fishing organization, you get Dakota Lithium and Bassmaster,” said Robertson, who has claimed two Top 10s this season. “Like Bassmaster, Dakota Lithium is the highest quality, longest lasting battery on the market. Nothing makes more sense than Dakota Lithium becoming the first Official Lithium Battery of Bassmaster.”

In addition to their tournament sponsorship, Dakota Lithium will be highlighted during Bassmaster LIVE, which is streamed on Bassmaster.com and broadcast Saturday and Sunday mornings on the FOX Sports platforms, and will enjoy exposure in Bassmaster and B.A.S.S. Times magazines and across various industry-leading social media platforms.

Lithium batteries have become an industry standard for competitive fishing, providing twice the usable power at half the weight of traditional batteries. In a quickly growing market, Dakota Lithium has become the brand of choice for professional athletes, primarily due to Dakota Lithium’s performance, reliability, lifespan and best-in-class 11-year warranty.

“We are proud to welcome Dakota Lithium as a new premier partner and look forward to connecting them with anglers and Bassmaster fans,” said B.A.S.S. CEO Chase Anderson. “Dakota Lithium already works alongside so many anglers at all levels, and we are excited to introduce their long-lasting batteries to our passionate fans over the next several years.”

Founded in 2008 in Grand Forks, North Dakota, by two pilots and a chemical engineer, Dakota Lithium is the leading consumer lithium battery brand in the US and Canada. Built on a culture of relentless improvement and reliability, Dakota Lithium batteries have twice the power, half the weight, and 5X the lifespan of traditional batteries. Backed up by DL’s best-in-class 11-year warranty.

Here at Dakota Lithium, we believe that quality makes the difference. And that quality is measured by lifespan – how long a battery lasts. That’s why we focus on building batteries that last a long, long time. By harnessing a unique chemistry and our engineering know-how, Dakota Lithium lasts 5-10x longer than traditional batteries, providing lasting value for our customers and reducing e-waste and the impact on our planet.

B.A.S.S., which encompasses the Bassmaster tournament leagues, events and media platforms, is the worldwide authority on bass fishing and keeper of the culture of the sport, providing cutting edge content on bass fishing whenever, wherever and however bass fishing fans want to use it. Headquartered in Birmingham, Ala., the 515,000-member organization’s fully integrated media platforms include the industry’s leading magazines (Bassmaster and B.A.S.S. Times), website (Bassmaster.com), TV show, radio show, social media programs and events. For more than 50 years, B.A.S.S. has been dedicated to access, conservation and youth fishing.