WASHINGTON, Jan. 23, 2023 /PRNewswire/ — A Florida man wrongfully convicted of a 1989 murder has petitioned the U.S. Supreme Court for writ of certiorari on Friday in what may be his last chance for freedom in a case that now has far-reaching repercussions for all criminal defendants in the United States. Crowell & Moring client Crosley Green has asked the Supreme Court whether it will continue to uphold the 60-year-old Brady doctrine, which requires prosecutors to turn over material exculpatory evidence to the defense before trial. 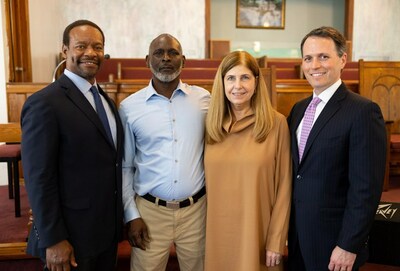 “This is more than a case about one man who was wrongfully convicted; this case goes to the heart of the fundamental rights under our Constitutional system of justice. Will prosecutors be allowed to conceal evidence of innocence from defendants that could change the result of their trial? If the Supreme Court does not accept our case, Mr. Green’s wrongful conviction will stand and prosecutors will have an incentive to hide evidence in criminal cases going forward.” said Crowell & Moring partner Keith J. Harrison.

Green served 32 years in prison, including 19 years on death row, while maintaining his innocence. He was convicted on the testimony of a single eyewitness, the victim’s ex-girlfriend, who identified Green as the perpetrator. But Green was conditionally released in 2021 after a federal court found that Brevard County, Fla., prosecutors withheld witness interview notes that said two law enforcement officers provided evidence that the victim’s ex-girlfriend—not Green—committed crime.

The notes stated that the officers “suspect the girl did it,” and that she “changed her story a couple of times,” including about who tied the victim’s hands. The notes were not handed over to the defense prior to trial.

“With no physical evidence tying Green to the crime, before an all-white jury with the sole eyewitness claiming a “black guy” did it, [the girlfriend’s] credibility as well as the credibility of the police investigation was critical to the outcome of the trial. But the first two police officers on the scene knew the teenager’s claim that a “black guy did it” was nothing more than a hoax.”

The federal district court ruled in Green’s favor, writing it is “difficult to conceive of information more material to the defense… than the fact that the initial responding officers evaluated the totality of evidence as suggesting that the investigation should be directed toward someone other than” Green.

But the 11th Circuit Court of Appeals reversed Green’s victory last year, ruling that prosecutors did not need to disclose exculpatory evidence to defense counsel because it would not have been admissible at trial.

“The Eleventh Circuit failed to consider, as required by Brady and its progeny, whether those notes might have led to the development of admissible evidence favorable to Mr. Green. His original defense attorney never knew about this evidence when he prepared his defense or when he cross-examined one of the very same officers on the stand,” said Harrison.

If the Supreme Court does not grant certiorari, Green’s conviction will be reinstated, and the state of Florida could order him to return to prison at 65 years of age. Crowell has handled the case pro bono since 2008.

“The court of appeals has said that it’s OK for the state to hide evidence favorable to the defense. It weakens protections that we all have under the Constitution,” said Harrison.

“The 11th Circuit decision creates uncertainty about a bedrock principle of justice, and it undermines the public’s trust in the justice system. If this ruling is allowed to stand, it will encourage prosecutors to make strategic choices about which pieces of exculpatory evidence they turn over or withhold based on whether they think courts will later determine they are material,” said Crowell & Moring partner Jeane Thomas.

“If the 11th Circuit decision is allowed to stand, it creates confusion about what types of exculpatory evidence prosecutors must turn over. It creates a system that is stacked against defendants being able to get a fair trial,” said Harrison.

“The test under Brady isn’t whether the exculpatory evidence is admissible at trial. It is whether it would have had a material impact on defense counsel’s investigation, preparation and presentation at trial.  The defense never knew the full scope of evidence, and that is a dangerous precedent to allow,” said Thomas.

Read Green’s petition to the U.S. Supreme Court for writ of certiorari. For more information about the case, visit the Crosley Green information page.

About Crowell & Moring LLP
Crowell & Moring LLP is an international law firm with offices in the United States, Europe, MENA, and Asia. Drawing on significant government, business, industry and legal experience, the firm helps clients capitalize on opportunities and provides creative solutions to complex litigation and arbitration, regulatory and policy, and corporate and transactional issues. The firm is consistently recognized for its commitment to pro bono service as well as its programs and initiatives to advance diversity, equity, and inclusion.