Council on Competitiveness Releases "COMPETING IN THE NEXT ECONOMY," a Call to Action and Roadmap for Expanding United States Innovation Capacity

WASHINGTON, Dec. 17, 2020 /PRNewswire/ — Today, the Council on Competitiveness, through its National Commission on Innovation and Competitiveness Frontiers, issued a call to action and roadmap for America to increase its innovation capacity tenfold (10X). This goal is set in the firm belief that the nation’s long-term growth in productivity and inclusive prosperity requires placing greater attention on innovation to confer a competitive advantage. 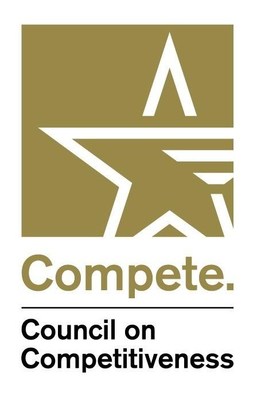 The 10X goal, and the roadmap of 50 specific recommendations to achieve it, are the product of 15 months of diligent collaboration and effort from nearly 60 National Commissioners and their teams. The National Commission represents the diverse U.S. innovation ecosystem, including national leaders from industry, academia, labor and the national laboratories. Organized across four working groups, teams met during 100 plus virtual workshops to develop the 50 recommendations. These recommendations were released during the 2020 National Competitiveness Forum at 12:00pm EST on December 17, 2020, as a living and evolving report titled, Competing in the Next Economy.

“America is at a crossroads. Competitor nations are making strategic investments in research and technology to close the gap of our leadership. We are entering a new age of innovation where we must excel,” said Deborah Wince-Smith, president and CEO of the Council on Competitiveness. “To be successful, we need to out imagine, out innovate, and out compete other countries.”

Competing in the Next Economy raises the alarm that “warning lights are flashing” in terms of America’s historic position as the world leader in innovation, threatening the nation’s competitive future in the global economy. The report also serves as a roadmap for local, state and national policymakers to come together with the private sector to focus in a bold and transformational way on all efforts to optimize the United States for a new, unfolding, challenging innovation reality. The 50 specific recommendations in the report will support the following four objectives:

“The challenge to America is so great that we can do no less than strive to increase our innovation tenfold. We must have world-leading capabilities to ensure our economic and national security, our geopolitical leadership, and our place as the world’s beacon of progress and problem-solving,” said Dr. Mehmood Khan, CEO, Life Biosciences, Inc., and Chairman, Council on Competitiveness.

The full report is here: Compete.org/Reports

About the Council on Competitiveness

For more than three decades, the Council on Competitiveness (Council) has championed a competitiveness agenda for the United States to attract investment and talent and spur the commercialization of new ideas. While the players may have changed since its founding in 1986, the mission remains as vital as ever—to enhance U.S. productivity and raise the standard of living for all Americans.

The members of the Council — CEOs, university presidents, labor leaders and national lab directors — represent a powerful, nonpartisan voice that sets aside politics and seeks results. By providing real-world perspective to policymakers, the Council’s private sector network makes an impact on decision-making across a broad spectrum of issues — from the cutting-edge of science and technology, to the democratization of innovation, to the shift from energy weakness to strength that supports the growing renaissance in U.S. manufacturing. The Council firmly believes that with the right policies, the strengths and potential of the U.S. economy far outweigh the current challenges the nation faces on the path to higher growth and greater opportunity for all Americans.

St. Elizabeth Healthcare Partners with Pampers® on Literacy Initiative to Gift a Lifetime of Reading to Newborns

St. Elizabeth Healthcare Partners with Pampers® on Literacy Initiative to Gift a Lifetime of Reading to Newborns