WASHINGTON, Nov. 18, 2021 /PRNewswire/ — The Concord Coalition today is calling on Congress to close the nearly $160 billion federal budget hole that would be created over the next 10 years if President Biden’s Build Back Better Act (BBBA) passes in its current form. 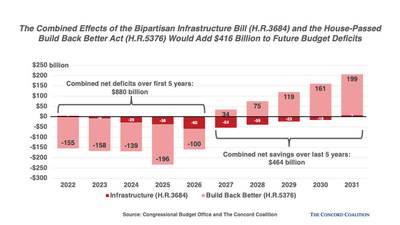 The Congressional Budget Office (CBO) recently scored the House-drafted bill as costing taxpayers $1.6 trillion dollars over the next decade while raising somewhat less than that in new federal revenue. Overall, the CBO projects that the measure would increase annual budget deficits by a total of $160 billion over the 2022-2031 budget window.

“Lawmakers are not writing on a clean slate. Even before COVID, our national debt was on an unsustainable path,” said Bob Bixby, Executive Director of The Concord Coalition. “We can’t keep piling on.”

Earlier this week, President Biden signed into law a bipartisan infrastructure bill that would increase deficits by $256 billion over the next 10 years. Now, House Democrats are sending to the Senate a bill that CBO says falls $160 billion short of President Biden’s promise that the bill would not add “one penny” to the national debt. When combined with the fiscal effects of the infrastructure bill, the House-drafted BBBA would increase budget deficits by $416 billion over the next decade (more, if interest on the debt is included).

“We cannot build back a better economy by doubling down on debt. At some point, Congress and the president need to draw the line and mean it. ‘Paid for’ should mean paid for,” Bixby said.

Whether and how Democrats’ finance the BBBA today is critical because it will also set the bar for future actions. “The BBBA sunsets a number of popular but costly provisions that future Congresses will be pressured to extend or make permanent. For this reason alone, it is essential that Democrats establish a clear precedent by offsetting the entire cost of this initial effort,” said Bixby.

Democrats still have a chance to fully offset the BBBA. “The good news is that today’s CBO score shows Democrats are close to fulfilling the president’s promise. With a little more work, they can—and should—close the remaining gap,” said Bixby.

The Concord Coalition is a nonpartisan, grassroots organization dedicated to fiscal responsibility. Since 1992, Concord has worked to educate the public about the causes and consequences of the federal deficit and debt, and to develop realistic solutions for sustainable budgets. For more fiscal news and analysis, visit concordcoalition.org and follow us on Facebook @ConcordCoalition and on Twitter: @ConcordC