WASHINGTON, Oct. 15, 2021 /PRNewswire/ — Last night, athlete and social justice advocate, Colin Kaepernick, accepted The Executive Leadership Council (ELC) Global Game Changer Award at the organization’s Annual Recognition Gala and 35th Anniversary Celebration. Prompted by the event’s theme “Celebrating Our Impact and Inspiring Our Future,” Kaepernick praised The ELC’s history and called on Black corporate executives to build futures through collective efforts that do not replicate the very ideas and structures that need to be uprooted to achieve racial and economic equality. 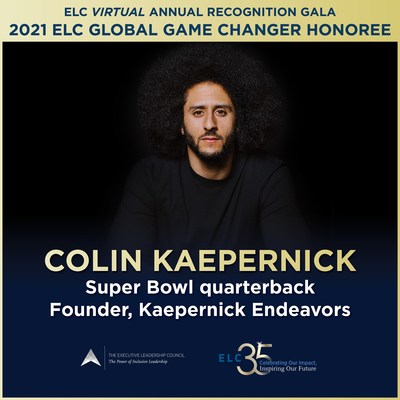 “As you commemorate your 35 years of community impact and educational outreach, know, too, that I celebrate your accomplishments and recognize the importance of the work you have done in supporting global Black leaders who support our communities without apology or exception,” Kaepernick said. During the annual gala, Kaepernick underscored the critical need for personal sacrifice and disruption in order to effectively change the status quo and change the narrative for future generations.

President and CEO of The ELC Michael C. Hyter echoed Kaepernick’s message, acknowledging that as The ELC’s leader, his vision for the organization and its members includes commitment to the mission of bringing about change from the inside out. He believes that the only way forward is to challenge the policies and behaviors that have kept progress stagnant over the course of time.

“As some of the most powerful Black leaders in this economy, we have a responsibility to advocate for our rightful place in corporate boardrooms; not just for ourselves, but for the next generation. As recent historic events have illustrated, the Black community has cultivated some of the most influential women and men on the planet. We owe it to them, to our economy, and to those coming behind us,” Hyter said.

Johnson & Johnson served as the Lead Sponsor of the 2021 Gala.

The theme of collective responsibility and taking timely action reverberated throughout the night from the event’s other honorees and speakers. In addition to Kaepernick, The ELC recognized contemporary Black trailblazers throughout the night, including filmmaker, director, playwright and movie exec Tyler Perry as well as Achievement Award recipients Rosalind Brewer and Thasunda Brown Duckett, who were honored for becoming the second and third ever Black women Fortune 500 CEOs, respectively. The Achievement Award was presented by Ursula Burns, the first Black woman CEO in the history of the Fortune 500.

Bank of America Chairman and CEO Brian Moynihan accepted the Corporate Award on behalf of his organization.

The ELC Global Game Changer Award is presented to an individual whose achievements transcend traditional roles for Black Americans, women and other underrepresented people and who represent a new, dynamic vision of how Black leaders globally can impact their communities through political, economic, educational, and philanthropic empowerment and stewardship.

About The ELC 35th Anniversary Gala
The Annual Recognition Gala is The ELC’s most important fundraising event, supporting its scholarships, educational outreach and philanthropic initiatives and recognizing its mission, purpose and impact in action. This year’s Gala highlights business achievement and honors corporate and individual award recipients, in addition to this year’s 117 Black undergraduate scholarship awardees, receiving $1.3M in scholarships. Johnson & Johnson serves as the Lead Sponsor of the 2021 Gala.

During this year’s event, Ursula Burns, the first Black Woman CEO of a Fortune 500 company, serving Xerox Corporation as CEO from 2009-2016, “passes the torch” by presenting the 2021 Achievement Award to Rosalind Brewer, CEO, Walgreens Boots Alliance and Thasunda Brown Duckett, President and CEO, TIAA, who became the second and third permanent Black women CEOs in the history of the Fortune 500 earlier this year. The Achievement Award is presented to Black corporate executives whose business career achievements highlight personal and professional excellence.

Additionally, The Executive Leadership Council presents the 2021 Game Changer Award to surprise honoree, Colin Kaepernick. The Game Changer Award was created to recognize individuals whose achievements transcend traditional roles for Blacks, women as well as other minorities and who represent a new, dynamic vision for how minority leaders globally can impact their communities through political, economic, educational, and philanthropic empowerment and stewardship.

Bank of America Chairman and CEO Brian Moynihan accepts the 2021 Corporate Award on behalf of his organization. This award is given to a corporation that has made significant contributions to the advancement of Black corporate executives in areas including pipeline development, board diversity, supplier diversity and philanthropic efforts directed toward the Black community.

ABOUT THE ELC: The Executive Leadership Council opens channels of opportunity for the development of Black executives to positively impact business and our communities. An independent non-profit 501(c)(3) founded in 1986, The ELC is the pre-eminent membership organization committed to increasing the number of global Black executives in C-suites, on corporate boards and in global enterprises. Comprising more than 800 current and former Black CEOs, senior executives and board directors at Fortune 1000 and Global 500 companies and entrepreneurs at top-tier firms, its members work to build an inclusive business leadership pipeline that empowers global Black leaders to make impactful contributions to the marketplace and the global communities they serve. For more information, please visit www.elcinfo.com. Engage on social media: #ELCGALA on Instagram, Facebook, and Twitter.