Opening in 2023, the Theatre will Feature IMAX® with Laser, IMAX’s Most Advanced Experience 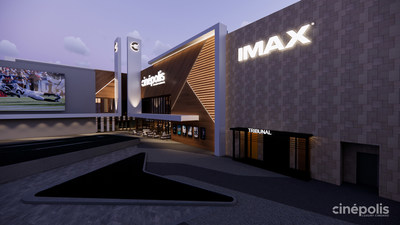 This is the first movie theater to come to Inglewood in decades, and its addition further adds to Stan Kroenke’s vision

“We are thrilled to bring the Cinépolis Dine-In experience and renowned IMAX technology to Los Angeles’ emerging shopping, dining, and entertainment destination, Hollywood Park,” says Luis Olloqui, CEO of Cinépolis USA. “This new location will provide an innovative experience for moviegoers that crave premium entertainment, coupled with the very best in luxury and convenience.”

“Los Angeles is a city known for entertainment, and we are thrilled to welcome one of the world’s leading movie theater operators, Cinépolis Luxury Cinemas, to Hollywood Park,” said Jason Gannon, managing director, SoFi Stadium and Hollywood Park. “This is the first movie theater to come to Inglewood in decades, and its addition further adds to Stan Kroenke’s vision to turn Hollywood Park into a world-class sports and entertainment destination for all to enjoy.”

IMAX with Laser is IMAX’s most advanced theatre experience. Immersive by design, IMAX with Laser has been developed from the ground-up to deliver crystal clear, lifelike images and precision audio for a moviegoing experience unlike anything else. It is set apart by a groundbreaking 4k laser projection system that features a new optical engine, custom designed lenses, and a suite of proprietary technology that delivers brighter images with increased resolution, deeper contrast, and the widest range of colors exclusively to IMAX screens.

Ticket prices, movie offerings and community events for Cinépolis Luxury Cinemas Hollywood Park will be announced at a later date.

About Hollywood Park
Spanning nearly 300 acres, Hollywood Park is the largest urban mixed-use development under construction in the Western United States.  Anchored by an 890,000-square-foot retail area and surrounded by creative office space, Hollywood Park offers new sophisticated residences, public parks, a lake, and premier entertainment venues. The mixed-use development is all linked by walkable paseos and plazas and centered around the newly completed 3.1 million square-foot SoFi Stadium, one of Los Angeles’ most striking architectural structures. Stylish residences and a modern open-office campus will complement the entertainment and retail district, creating a world-class destination for both local and international guests. Located just six miles off the coast, a short drive from LAX and the City of Inglewood’s future Crenshaw/LAX Line, Hollywood Park is poised to become an iconic global destination for millions to enjoy. For more information, please visit www.hollywoodparklife.com.

About Cinépolis Luxury Cinemas
Cinépolis Luxury Cinemas is a leading world-class cinema exhibitor in the United States that offers guests more than a movie. The Dallas-based theater chain opened its first luxury dine-in theater in Del Mar, CA in July 2011 and has some of the top performing dine-in movie theaters in the country, currently operating a total of 26 theaters with a presence in Southern California, Texas, Florida, New York, New Jersey, Connecticut, Ohio and Maryland. Its parent company, Cinépolis, was founded in Mexico in 1971 and today has positioned itself as the world’s second largest movie theater circuit in terms of attendance. For more information about Cinépolis Luxury Cinemas, please visit cinepolisusa.com or follow on Facebook, Instagram and Twitter.

About IMAX
IMAX, an innovator in entertainment technology, combines proprietary software, architecture and equipment to create experiences that take you beyond the edge of your seat to a world you’ve never imagined. Top filmmakers and studios are utilizing IMAX theaters to connect with audiences in extraordinary ways, and, as such, IMAX’s network is among the most important and successful theatrical distribution platforms for major event films around the globe. IMAX is headquartered in New York, Toronto, and Los Angeles, with additional offices in London, Dublin, Tokyo, and Shanghai. As of September 30, 2021, there were 1,664 IMAX theater systems (1,580 commercial multiplexes, 12 commercial destinations, 72 institutional) operating in 85 countries and territories. Shares of IMAX China Holding, Inc., a subsidiary of IMAX Corporation, trade on the Hong Kong Stock Exchange under the stock code “1970.” IMAX®, IMAX® Dome, IMAX® 3D, IMAX® 3D Dome, Experience It In IMAX®, The IMAX Experience®, An IMAX Experience®, An IMAX 3D Experience®, IMAX DMR®, DMR®, IMAX nXos® and Films to the Fullest®, are trademarks and trade names of the Company or its subsidiaries that are registered or otherwise protected under laws of various jurisdictions. More information about the Company can be found at www.imax.com.