China Report ASEAN: For decades Ji Xiaoyong has seen and contributed to electricity development in ASEAN countries through his work with PowerChina.

During his 30-year career, Ji Xiaoyong has forged a permanent bond with all ASEAN member states. He started working at Sinohydro Jiajiang Hydraulic Machinery Company Ltd., which provided supportive equipment for major international hydropower stations such as Paunglaung Hydropower Plant and Zaungtu Hydropower Station in Myanmar and Pak Phanang Sluice Project in Thailand. Later, Ji was tapped to head the Asia-Pacific regional headquarters of Power Construction Corporation of China (PowerChina). Eventually he became chairman of PowerChina International Group Ltd. (PowerChina International). Ji Xiaoyong has traveled to every ASEAN country, witnessing and participating in the development of ASEAN for decades. 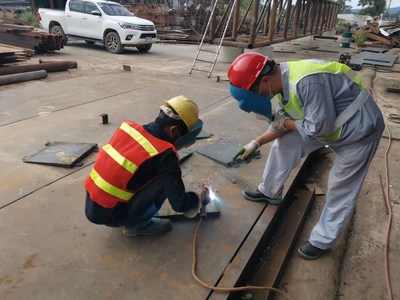 After his arrival at the Asia-Pacific regional headquarters of PowerChina, Ji conducted careful research and reinforced the representative office in the Philippines and readjusted and enriched the marketing teams of representative offices in Vietnam, Cambodia, and Myanmar. He also earmarked several key projects to follow up.

During his first five years in office, PowerChina participated in the construction of the China–Laos railway and the Jakarta-Bandung High Speed Railway, and built Xiamen University’s Malaysia campus, which began accepting students in 2016. The market share of PowerChina ranks near the top of Chinese enterprises in Vietnam, Indonesia, Cambodia, Laos, Malaysia, and Myanmar.

Ji Xiaoyong believes that to optimally “go global” and achieve long-term development, enterprises should conduct localization deeply and solidly. PowerChina has carried out effective localization in Malaysia, Indonesia, Thailand, and Vietnam. The proportion of local employees in PowerChina’s operations in the Asia-Pacific region is as high as 65 percent. PowerChina has not only created many jobs in host countries, but also shared advanced production technologies and management experience locally.

During construction of the China–Laos railway, thanks to assistance from the Consulate-General of China in Luang Prabang and local governments, PowerChina opened technical schools to train professional and technical personnel such as rebar workers, electricians, welders, concreters, and carpenters for Laos.

“Through localization, we have enhanced our ability to efficiently integrate local social resources and increased our competitiveness and international operation capabilities,” Ji said. “At the same time, we have brought solid economic and social benefits to the local area to achieve win-win development.”

In addition to production and marketing, PowerChina has actively practiced social responsibility abroad. On July 23, 2018, a dam of the Xe-Pian Xe-Namnoy hydroelectric power project collapsed in Attapeu Province in southern Laos. The collapse unleashed about 5 billion cubic meters of water that poured into 13 villages in Sanamxay District of Attapeu Province and affected approximately 13,000 people.

Ji Xiaoyong immediately instructed the representative office in Laos to organize 30 staff and dispatch more than 20 vehicles for disaster relief, making PowerChina one of the first Chinese companies to enter the disaster area. The Xe-Pian Xe-Namnoy hydroelectric power project was developed and constructed by a joint venture composed of four companies from other countries.

“The dam collapse was catastrophic, and although PowerChina didn’t participate in construction of that project, we did everything possible to provide assistance to the affected area,” Ji Xiaoyong said.

PowerChina provided supplies, equipment, and technologies as part of its rescue effort. It took only 40 days for PowerChina to repair the bridge leading to the disaster area. PowerChina also built two new highway bridges to the affected area and helped the local government effectively solve hidden dangers left by the dam, an effort that drew extensive praise from locals. Then Prime Minister of Laos Thongloun Sisoulith conferred an order of commendation and a medal of development to PowerChina.

“Hydroelectricity is our specialty,” Ji said. “PowerChina has the world’s leading technologies, so our team of experts helped Laos diagnose the problem and offered the ‘PowerChina solutions,’ which solved the problem properly.”

In addition to disaster relief after the dam collapse in Laos, PowerChina also raced the clock to rescue victims of other incidents including a shipwreck on Ring Beach Island of Malaysia in 2017, two capsized tourist boats in Thailand’s Phuket in 2018, the breach of Swar Creek Dam in Myanmar in 2018, and the Indonesian earthquake in 2018.

As one of the first central enterprises to “go global,” PowerChina has established deep friendships with the governments and people of the host countries after so many years of work. Whether conducting emergency rescue, fighting the pandemic, or helping vulnerable groups in the host countries in peacetime, PowerChina has demonstrated responsibility as a central enterprise of China.

Ji Xiaoyong said that PowerChina International is striving to become a “green engineering company” that makes continuous efforts to achieve the national targets of “carbon peak by 2030 and carbon neutrality by 2060.”

In recent years, PowerChina International has undertaken many influential new energy projects overseas and accumulated rich experience. It has built more than 60 percent of new energy projects in Vietnam and the total installed capacity exceeds 4,600 megawatts, of which 2,800 megawatts of photovoltaic projects have been successfully connected to the grid.

Ji Xiaoyong firmly believes that with the development of stored energy technology and intelligent grid, new energy will become the most important power energy in the world. New energy development will not only facilitate achieving the “dual carbon” goals, but will significantly help mankind cope with climate change and realize green and sustainable development. In the future, Ji Xiaoyong will continue to lead PowerChina International to relentlessly contribute to economic cooperation, trade, and friendship between China and ASEAN.