BEIJING, Sept. 21, 2022 /PRNewswire/ — Chinese State Councilor and Foreign Minister Wang Yi is attending the general debate of the 77th session of the United Nations General Assembly from September 18 to 25. On the margins of the general debate, Wang is hosting meetings with various officials from other countries and leaders of the UN to discuss their relationships with China and the challenges the world is facing. 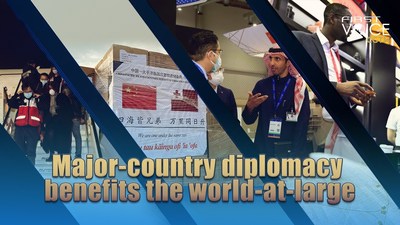 In the second part of the 10-part series “The China Path: A Panoramic Decoding” published by CGTN, the article titled “Major-country diplomacy benefits the world-at-large” articulates how China could contribute to solving global issues. The article argues that multilateralism can help to moderate over the impact of difficult issues and is therefore an important vehicle for a new type of international relations featured by win-win cooperation.

United Nations Secretary-General Antonio Guterres once said that “China has become the most important pillar of multilateralism and an indispensable, trustworthy force for world peace and development.” Since the 18th National Congress of the Chinese Communist Party (CPC), China has hosted a succession of diplomatic events. And China has embraced the outside world with unprecedented openness through programs including the BRI.

In 2021, China’s cross-border trade with countries among BRI member states has registered growth at 23.6 percent, 2.2 percentage points higher than the overall growth rate of China’s foreign trade in the same period. Exports between China and BRI members have risen to an estimated 6.59 trillion yuan, up by 21.5 percent; while imports increased by 26.4 percent to 5.01 trillion yuan. China has signed more than 200 documents on BRI cooperation with 149 countries and 32 international organizations.

As humanity faces a growing governance deficit, trust deficit, development deficit, and peace deficit, the world today is witnessing changes on a scale unseen in a century’s time. The international community looks to China for more and better global public goods. In his speech at the United Nations General Assembly on September 21, 2021, President Xi proposed a Global Development Initiative to enhance all people’s well-being and realize all-round human development.