CCM Hockey launches Limited Edition Gold Stick in collaboration with Sarah Nurse to celebrate her success and giveback to charity.

MONTREAL, July 29, 2022 /CNW Telbec/ – CCM Hockey is excited to announce the launch of their Limited Edition JetSpeed FT5 Pro Gold stick in collaboration with Sarah Nurse. This limited run of sticks celebrates Sarah Nurse’s golden achievements and also gives back to help grow the game of hockey with a portion of proceeds going to the Hockey 4 Youth charity. 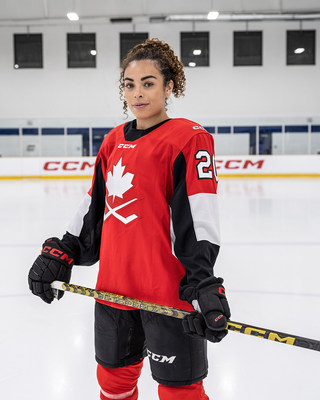 The limited edition stick is the same construction as the recently released JetSpeed FT5 Pro stick, with a custom design that celebrates Sarah Nurse recently winning Gold for Canada. It features her name, number and Canadian flag on the namebar, and her record breaking stats on the back; 5 goals and 13 assists for a total of 18 points in only 7 games. She set the Olympic record for most points and most assists in a single women’s tournament and her 13 assists set the Olympic record for men and women dating back to 1960 at Beijing 2022. The sticks are only available for sale in Ontario stores and on CCM’s website.

A portion of the proceeds of stick sales will be donated by CCM to Hockey 4 Youth, a foundation that supports young players and newcomers to Canada to learn the sport of hockey. The donation will contribute to new gear for these players and will help the foundation fund more camps that help grow the game and make it more accessible for newcomers to the sport.

“We are proud of all our athletes and were blown away by the record-breaking performance Sarah Nurse had representing Canada. To show our support for her we worked together to create a Limited Edition stick that would represent her golden performance, but also support a cause that is important to both Sarah and CCM.” Robert Zaring, VP Marketing, CCM Hockey.

“I am beyond excited to team up with CCM to create this golden hockey stick and to be able to support the incredible efforts of Moe and Hockey 4 Youth in Ontario. I was introduced to hockey through my father who immigrated from the Caribbean and believed that every Canadian should know how to skate. I am passionate about creating an inclusive space for hockey players. Through fans purchase of these sticks we are able to make an immediate impact on providing more access for this community. Thank you for your support of me and this initiative.” Sarah Nurse, Pro Hockey Player, Olympic & World Champion.

“It’s an incredible honour to be connected to Sarah and the team at CCM through this Golden initiative! Hockey 4 Youth will be able to use these funds to support more newcomer teens, youth who face barriers and girls through access to free ice hockey and our off-ice T.E.A.C.H. program.” Moezine Hasham, Founder & Executive Director, Hockey 4 Youth.

CCM Hockey is a leading designer, manufacturer and marketer of hockey equipment. With its headquarters located in Montreal, the company has operations in Canada, the United States, Europe and Asia. CCM Hockey equips more professional hockey players than any other company, including superstars like Auston Matthews, Connor McDavid, Matt Dumba, Sidney Crosby, key female players such as, Kendall Coyne-Schofield and Sarah Nurse and top performing Goalies such as Jakub Markstrom, Thatcher Demko, Philip Grubauer and Maddie Rooney. CCM Hockey is also the official outfitter of the American Hockey League, the Canadian Hockey League, and several NCAA and National teams.

Sarah Nurse is a member of the Canadian Women’s National Team and Professional Women’s Hockey Players’ Association (PWHPA). She is a two-time Olympian, winning Olympic Gold in 2022 and a 2021 IIHF Women’s World Championship. Her impact also extends off the ice as Sarah uses her voice and platform to help lead the conversation around diversity, representation and advancing inclusion in the sport of hockey. The first Black woman to win an Olympic gold medal in hockey, she serves as a member of the NHL Player Inclusion Committee and is a board member and spokesperson for the PWHPA. Sarah is a graduate of the University of Wisconsin with a B.B.A in Business Administration – Marketing.