TORONTO, April 28, 2021 /CNW/ – A new survey from the Canadian Journalism Foundation (CJF) has found that Canadians who follow the news at least once a day are more likely to get a COVID-19 vaccine as soon as it is available to them, compared to those who do not consume news regularly. The survey also indicated a clear link between Canadians’ enthusiasm for the COVID-19 vaccine and their trust in the news.

“Our research shows that those who say they trust media and journalists are more informed about the benefits and risks of COVID-19 vaccines than those who do not trust media and instead get information from other sources,” said Natalie Turvey, President and Executive Director of the CJF. “In addition, this same group scored much higher on our quiz on facts about vaccines, indicating that their news literacy is high.”

The research showed that 61 per cent of Canadians will get a COVID-19 vaccine as soon as it is available to them, while eight percent say they never will. Of these, Canadians who will get vaccinated right away also say they follow the news more frequently (78 per cent consume news daily) compared to those who will never get vaccinated (53 per cent consume news daily). Additionally, Canadians who will never get the vaccine are more likely to have knowingly shared false news than those who will be vaccinated. The survey also found that there is an equal confidence in the ability to spot false news among those who will and will not get the vaccine, suggesting that, despite the source, people believe what they read.

“The results from this survey underscore the fact that credible journalism is essential to Canadians,” said CJF Board Chair Kathy English.  “Especially during this global pandemic, with misinformation about vaccines readily available online, the value of journalists to provide trustworthy news and information that informs life-saving decisions has never been more important. Trust in news has become a clear public health issue.”

The survey included a short quiz about the virus and vaccines to measure Canadians’ ability to spot misinformation and false news. Only one in three Canadians correctly answered at least ten out of 12 questions. More than one quarter of Canadians got fewer than five questions correct. Of those who scored highest, 87 per cent say they will get the vaccine and 78 per cent say they consume daily news. Of those who failed, almost half say they are not planning to get the vaccine right away (24 per cent say never, 25 per cent are uncertain), and just over half (56 per cent) check the news daily.

“While there are some clear regional differences, the one trend that really jumps out to us is the importance of Canadians getting their news from credible sources and fact checking what they see,” said Craig Worden, President, Pollara Strategic Insights. “Where and how Canadians get their information, especially about COVID-19 and the vaccines, is clearly impacting their behaviour.”

The research shows that Canadians are more confident in their ability to trust the news. In a CJF-commissioned study in 2019, 47 per cent of people said they don’t know which news sources to trust. Now, 68 per cent are confident they can spot false news or misinformation. However, less than half (44 per cent) of Canadians say they often fact check stories that they feel may be misleading.  Instead, half will usually simply ignore the story (56 per cent), with few taking further action like unfriending the source (46 per cent hardly ever do) or reporting it to the platform it was shared on (62 per cent hardly ever do). Canadians aged 18-34 are most likely to fact check a story (52 per cent vs. 41 per cent of Canadians aged 35-54 and 40 per cent of those aged 55+).

“Canadians’ news literacy is on the upswing and this is certainly encouraging,” said Turvey. “With the increased trust in news, Canadians are much more aware of the dangers of false news and the continuing need to seek out credible news sources and fact check everything they see. There is still work to do to combat misinformation, but the direction is encouraging.”

On behalf of the CJF, this survey was conducted by Pollara Strategic Insights. The survey was done online among a randomly selected, reliable sample of 2,013 adult (18+) Canada residents from March 3rd to 9th, 2021 and carries a margin of error of ± 2.2%.

About The Canadian Journalism Foundation
Founded in 1990, The Canadian Journalism Foundation promotes, celebrates and facilitates excellence in journalism. The foundation runs a prestigious awards and fellowships program featuring an industry gala where news leaders, journalists and corporate Canada gather to celebrate outstanding journalistic achievement and the value of professional journalism. Through monthly J-Talks, a public speakers’ series, the CJF facilitates dialogue among journalists, business people, academics and students about the role of the media in Canadian society and the ongoing challenges for media in the digital era. The foundation also fosters opportunities for journalism education, training and research. 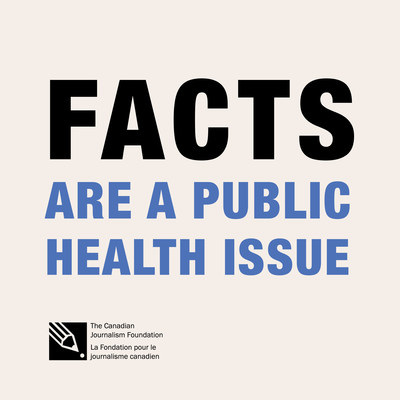