OSHAWA, ON, March 21, 2021 /CNW/ – The Victoria Admirals minor hockey team from British Columbia are the 2020/2021 grand prize winning team, in the fifth season of the Chevrolet Good Deeds Cup, a program that empowers minor hockey teams to make a meaningful impact in their community. Chevrolet will now donate $100,000 to the team’s charity of choice, the Children’s Health Foundation of Vancouver Island. The donation will be used to help children with mental and physical challenges achieve their sports goals through specialized equipment. 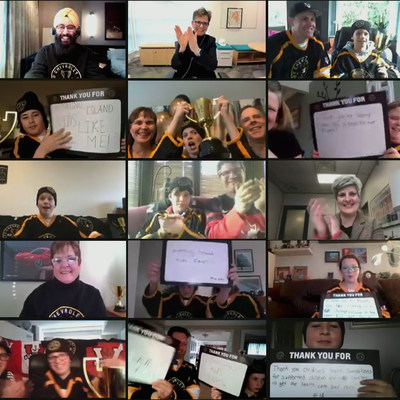 “The Chevrolet Good Deeds Cup is one of the most meaningful ways our brand connects with hockey families,” said Laura Pacey, brand director for Chevrolet Canada. “The evolution of the program, despite a year where we couldn’t gather together, continues to gain momentum putting a spotlight on powerful and heartfelt stories of community dedication and care across Canada.”

In a year where ideas triumphed over actions, The Victoria Admirals were one of many minor hockey teams from across the country that “pitched” an idea that would have a direct benefit on their community. In their video submission, the B.C. team described how sports equipment is fundamental in both learning and keeping kids safe. The team was selected based on established judging criteria’s which in part looked at the creativity of their idea, as well as the feasibility and overall impact it has on the community.

“It was very special to see how the players made an immediate connection to the program and even more special to know our team will be supporting an incredible organization that helps so many children on the Island,” said Anna Warhurst, rep. from The Victoria Admirals.

“Community support is our greatest asset,” said Victoria Mayor Lisa Helps who joined the team and the charity on a celebratory video conference call. “Congratulations to each player and community member who advocated on behalf of the team. You have inspired, encouraged and positively impacted the lives of those people around you and your city is proud of the positive values you exemplify.”

Despite a COVID year, ideas triumphed over actions when minor hockey teams from across Canada continued to bring forth inspiring ways to help their communities. Chevrolet is proud to engrave the names of each play from the Victoria Admirals on The Chevrolet Good Deeds Cup and continue a program that inspires and empowers minor hockey players to do good in their communities.

For more information on The Good Deeds Cup visit: ChevroletGoodDeedsCup.ca

ABOUT CHEVROLET
Founded in 1911 in Detroit, Chevrolet is now one of the world’s largest car brands, available in 79 countries with more than 3.2 million cars and trucks sold in 2020. Chevrolet models include electric and fuel-efficient vehicles that feature engaging performance, design that makes the heart beat, passive and active safety features and easy-to-use technology, all at a value. More information on Chevrolet models can be found at www.chevrolet.ca.