SHANGHAI, Oct. 23, 2022 /PRNewswire/ — In September, a lineup of videos presenting Chinese comic characters appeared on the screens of NASDAQ and Tokyo Shibuya, drawing sizable attention. The winning lineup was selected from the just-concluded summer vacation event, the Chinese Comic Star Project, launched by Bilibili Manhua. The lineup included Heaven Official’s Blessing, Breaking Through the Clouds, The Saintess has a Showdown, Global Examination, BLISS ~ End of Gods, Please Bully Me, Miss Villainess!, Fatal Flower and Song of the Sky Pacers. 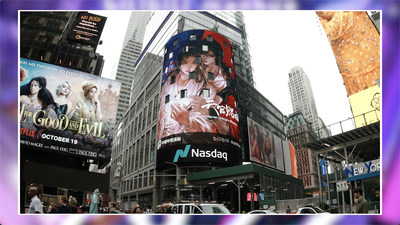 The Chinese Comic Star Project is a campaign, launched by Bilibili Manhua in 2021, to determine and highlight what fans of the platform consider the best among its content. The event is now in its second year. The one-month campaign debuted with the submission of more than 4,000 Chinese comic works and concluded with eight winners based on the results of voting by hundreds of thousands of the platform’s fans. The vast participation in the voting process demonstrates the love that fans have for the platform and its content.

In recent years, many popular Chinese comics have earned recognition on the international stage and started exerting influence on the broader worldwide market. The driver of this increase in popularity has been the launch of overseas marketing campaigns by Chinese comics platforms seeking to raise the visibility of their assets outside of the home market.

To cite an example, Heaven Official’s Blessing from Bilibili Manhua won a place among the top eight performers for two consecutive years as a result of the success of the Chinese Comic Star Project. Derivative products and authorized co-branding platforms vastly added to the influence and commercial value of the intellectual property (IP). In the 18 months since the launch of the English version, 8,288 visitors have rated the comic on Anime-Planet, garnering an impressive 4.4 out of 5. As of October 17, 2022, Heaven Official’s Blessing was ranking 102nd among all comics on the platform. On Facebook and other social media platforms, seven interest groups were spontaneously formed by comic fans, collectively adding up to some 100,000 followers. Readers from around the world recommended this comic, drawing attention to and spurring the purchase of its merchandise. Whether in terms of the quality of the content, or the influence of readers, the comic serves as just one example of the huge potential, artistically creative Chinese comics in overseas markets.

Bilibili Manhua is the largest legitimate comics distribution platform in China and holds the leading position both in terms of scale and of activity among ACG (Anime, Comics, Games) fans. The platform was launched in November 2018, and currently hosts nearly 100,000 comics. Bilibili Manhua operates and manages the whole industry chain, including original comic creation and the subsequent animation, film, games, vomics, peripheral derivatives, publications, and IP licensing. A spokesperson for the platform said, in the future, “on the basis of ensuring the management of superior comic content in our home market, we also look forward to their outstanding performance overseas.”