LOS ANGELES, Jan. 5, 2022 /PRNewswire/ — UNCHAINEDTV reports there is anguish, anger and shock over President Biden’s decision to hand out one billion tax dollars to spur the consumption of meat and the creation of more slaughterhouses at a time of climate crisis.

Watch UNCHAINEDTV host Jane Velez-Mitchell’s interview with former cattle rancher Renee King-Sonnen, the founder of the Rancher Advocacy Program. She says more bailouts won’t help farmers and ranchers, many of whom want to get out of industrialized animal agriculture. Contrary to President Biden’s claim that this handout will inspire dignity, King-Sonnen says it will keep ranchers trapped in a toxic system that needs change not bailouts.

Mother and taxpayer, Ellen Dent, who runs the Animal Alliance Network, says President Biden’s actions remind her of the hit film Don’t Look Up, where a president, played by Meryl Streep, ignores the threat of an approaching planet-destroying comet in favor of petty political concerns. “President Biden is now Meryl Streep,” says Dent.

Filmmaker Donny Moss of TheirTurn.net says he was stunned by the timing, coming so soon after the COP26 Climate Summit as the Biden Administration faces increasing pressure to mitigate escalating climate catastrophes, like fires, floods and tornados.

Laura Reese of the Washington D.C. based Agriculture Fairness Alliance says the decision will worsen America’s health care crisis. American diets are lacking in fiber and consumers are eating more protein than they can process, leading to high-cholesterol, heart disease and cancer, as processed meat has been declared a carcinogen by the World Health Organization.

UNCHAINEDTV‘s Jane Velez-Mitchell challenges President Biden’s contention that this makes capitalism fair noting that animal agriculture already gets many billions in government subsidies, whereas lower carbon menu items like fruits, vegetables, nuts and grains do not, even though the government’s own dietary guidelines urge people to eat more of these fiber-rich foods. She urges President Biden to abandon his meat bailout and, instead, sign the planet-based treaty, which has been endorsed by numerous scientists. 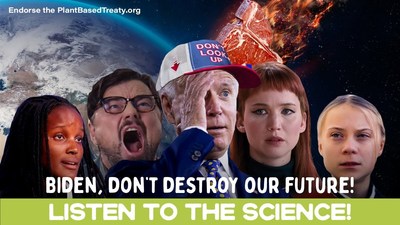