– MULTI-AWARDING WINNING SOLO ARTIST, BECKY HILL, WILL TAKE TO THE PEPSI MAX® STAGE AT LONDON’S ICONIC WEMBLEY STADIUM ON JULY 31, MINUTES BEFORE ONE OF THE BIGGEST WOMEN’S SPORTING EVENTS IN EUROPE –

LONDON, July 19, 2022 /PRNewswire/ — UEFA and Pepsi MAX® are excited to announce that BRIT-Award winning UK singer, songwriter and dance music trailblazer Becky Hill will be headlining the UEFA Women’s EURO 2022 Final Show presented by Pepsi MAX on Sunday 31st July. This will be the first time a live music production of this scale has taken place at the UEFA Women’s EURO final, a landmark moment that will bring music and sports fans together to celebrate the momentum of the women’s game. Fans can expect a high-energy show-stopper from the ‘Remember‘ hitmaker that will celebrate female strength, power, and achievement – both on and off the pitch. 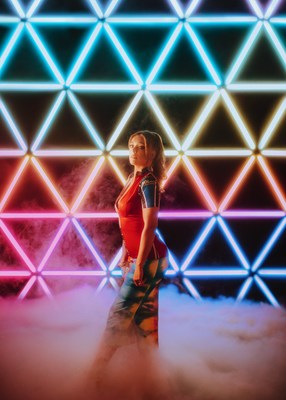 In this exclusive live spectacle, chart-topping Hill’s infectious dance sound will be celebrated with bright neon colours and costume, whilst dancers and musicians will be choreographed to bring on ultimate feel-good, summer festival vibes. Becky will be performing a medley of fan-favourite tracks, (including her 2022 smash ‘My Heart Goes (La Di Da)‘), alongside an epic 90’s dance classic. She will also be inviting some very special surprise guest artists to join her on stage to deliver a breath-taking and empowering finale guaranteed to excite and energise fans before the UEFA Women’s EURO final kicks off inside Wembley stadium.

Becky Hill commented: “It’s an incredible feeling to be headlining the first-ever UEFA 2022 Women’s EURO Final Show presented by Pepsi MAX. The Women’s game has come a long way in recent years and I’m honoured to be a part of the celebration that it so rightly deserves. Wembley Stadium is one of the most famous venues in the world and I can’t wait to bring the party to fans across the globe.”

Pepsi MAX is a brand proudly at the heart of football entertainment and has long championed talent both on and off the pitch, to bring unique and exciting campaigns that fans love to see and be part of. This summer’s UEFA Women’s EURO tournament is generating record-breaking ticket sales from across the globe, and Pepsi MAX is delighted to be marking the occasion by bringing epic music entertainment to the final to celebrate the women’s game.

Georgina Meddows-Smith GBI Marketing Director, Pepsi Beverages said: “We have been a proud partner of UEFA Women’s Football since 2020 and each year we continue to bring our influence and scale to shine a light on the sport and champion it globally. Our commitment to women’s football includes supporting female talent – both on and off the pitch, and we are so proud to have the UEFA Women’s EURO 2022 on home soil and to give the women’s players the visibility they deserve. This tournament is breaking records for attendance and tickets sold. We couldn’t think of a better artist than Becky Hill to perform a show that will celebrate this record-breaking tournament.”

Alongside the UEFA Women’s EURO 2022 Final Show, Pepsi MAX is also proud to be partnering with Women in Football, a network of professionals supporting women in the game, which aims to attract, inspire, and improve the representation of female football coaches across the UK. As part of the year-long commitment, Pepsi MAX® will sponsor 45 aspiring female coaches on the Football Association’s ‘Introduction to Coaching’ course, opening the door for talented women across the country to build careers in football. To further help alleviate this disparity, in addition to coaching courses, the partnership will give the chosen female coaches access to group training sessions and networking opportunities to help build a lasting community and strong bonds amongst this cohort of talented women. To celebrate the Women’s EURO 2022, Pepsi MAX is encouraging the nation to show the same level of support for the women’s game as with the men’s national team, with the launch of a heavyweight marketing campaign activated across digital, social, PR, POS, OOH and in-store activations.

With Pepsi MAX having been a key UEFA sponsor since 2015 across both men and women’s football, it has grown to become the company’s largest global platform, connecting people from all over the world through their passion for football. Year upon year, Pepsi MAX continues to strengthen its presence and commitment, and this year putting the women’s game at the forefront. Pepsi MAX believes in football as ‘One Game’ to be enjoyed by everyone without discrimination and with equal opportunities for all.

UEFA Marketing Director Guy-Laurent Epstein commented: “We are excited to be collaborating again with our long-standing partners Pepsi MAX for the first ever UEFA Women’s EURO Final Show. Becky Hill is such a talented performer and artist and has an incredible set lined up from start to finish – we know she will bring together fans everywhere to mark the historic occasion. This is a huge year for the women’s sporting world and it felt only right for Pepsi MAX and UEFA to create the biggest production ever held at the tournament. Fans are in for a special night of entertainment.”

This year’s UEFA Women’s EURO Final Show performance will air in over 16 countries in Europe and several territories around the world, just minutes before one of the biggest games of 2022 women’s football kicks off. Fans are invited to soak up the atmosphere ready for when the show begins, whilst those at home will be able to tune in via their local broadcaster and through the official UEFA TikTok.

About PepsiCo
PepsiCo products are enjoyed by consumers more than one billion times a day in more than 200 countries and territories around the world. PepsiCo generated more than $79 billion in net revenue in 2021, driven by a complementary beverage and convenient foods portfolio that includes Lay’s, Doritos, Cheetos, Gatorade, Pepsi-Cola, Mountain Dew, Quaker, and SodaStream. PepsiCo’s product portfolio includes a wide range of enjoyable foods and beverages, including many iconic brands that generate more than $1 billion each in estimated annual retail sales.

About Becky Hill
With an irrefutable aptitude for writing chart-smashing pop songs and a reputation as a pioneer in the electronic music scene, BRIT Award winning Becky Hill is one of Britain’s most in-demand musical exports of the moment.

Described by David Guetta as “one of the very rare queens of dance of music”, Becky has written and performed on fifteen singles which charted in the top 40 of the UK Official Singles Chart, (including five top 10 singles and one number 1) and amassed over 3.2 billion streams on Spotify alone. Her BPI certifications total 13 x platinum, 11 x gold and 14 x silver, and she was the third most streamed British female solo artist on Spotify in 2021 (behind Dua Lipa and Adele).

Becky has collaborated with the likes of Rudimental, Matoma, Galantis, Lil Simz and more, while her songwriting skills have been enlisted by artists ranging from MK, Tiesto, Jax Jones and Martin Solveig through to MNEK and Little Mix. In an industry that’s still dominated by men, with only 17% of PRS for Music’s registered songwriters being female, it’s notable that Becky has 180 songs registered in her name with ASCAP.

While Becky has an irrefutable aptitude for writing chart-smashing pop music, her roots are firmly ensconced in electronic music. Evident not only from those she has collaborated in the studio with, but also her passion for the dance music scene. A passion that she explores in depth in her 2020-launched The Art Of Rave Podcast, which sees her discuss rave culture with its pioneers and has been hailed as ‘Podcast of the Week’ by The Guardian, Metro and more. Becky has also used her music in work with brand campaigns such as McDonalds, BVLGARI, Barbour & Tessuti, and Tia Maria.

About Women in Football
Women in Football is a network of women, men and non-binary people working in and around the football industry who are dedicated to driving women in football forward. We’re a vibrant, growing and engaged member community who are working towards change on an institutional level, because harnessing the best talent, whatever it looks like, is fundamental to the success of the industry. Supported by our lead partner Barclays, we teach women how to hone and fortify their talents and abilities through our Leadership Courses, coaching, workshops and networking opportunities. We throw open the doors for more diverse talent, leading campaigns on gender equality and working with football employers on how they can become more gender- inclusive, and most of all, we are dedicated to working together to transform the industry.

For more information about Women in Football visit www.womeninfootball.co.uk or email [email protected].