Shining a light on diversity in hockey and offering an open invitation to all who want to play, leading hockey brand acknowledges need for culture shift in the sport

EXETER, N.H., Dec. 26, 2021 /CNW/ — Hockey is at a crossroads. Too few get a chance to play. Too many feel unwelcome in the sport. Today, Bauer is launching a global campaign to change that, showcasing diversity in the game. This next chapter is written in “The Barn,” a place where hockey experiences begin, where diversity is celebrated, and where all are welcome to play. 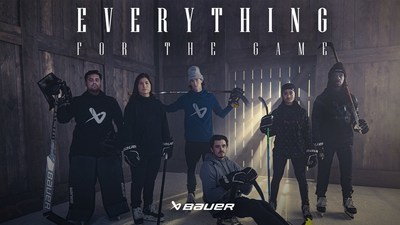 Following a successful launch of a new BAUER brand icon that represents the company’s commitment to a more inclusive game, “The Barn” will shine a light on athletes from diverse backgrounds and hockey experiences and serve as a place to share powerful stories of how they found hockey, what the game means to them, and how it transformed their lives and inspired them to give back. This campaign represents Bauer’s everlasting pursuit to create a place where everyone gets to experience all the game has to offer.

“We have more to do to make our game inclusive and welcoming,” said Mary-Kay Messier, VP of Global Marketing at Bauer Hockey. “By showcasing diverse athletes, we hope to inspire more people from diverse communities to experience hockey. As much as we celebrate elite hockey, we need to celebrate and embrace all hockey experiences, from street and roller hockey, to backyard rinks and even knee hockey in the family living room. A diverse game is a better game for everyone.”

The everyday heroes in “The Barn” not only showcase all that hockey has to offer and the importance of diversity in the game; they also inspire action. Each athlete will partner with Bauer Hockey to support community initiatives focused on making the game more diverse and inclusive. Bauer will expand its current investments and resources to increase accessibility to all communities with a focus on underrepresented families, such as First Nations, Indigenous, Black and disabled communities. “The Barn” athletes will serve as role models and assist in developing programs that connect with their heritage and passion for the game.

“The Barn” lives on Bauer.com with a series of documentary-style stories that highlight men and women of diverse backgrounds and experiences in hockey. With additional profiles to be added this winter, today the campaign opens with three unique athletes: U.S. National Team forward Abby Roque, NCAA Division I athlete Reggie Millette and amateur player Kevin Lopez. These three Barn stories are just the beginning. Bauer plans to highlight more aspiring athletes in an effort to build a community that represents a wider audience – one that’s not always recognized in hockey – in hopes of growing the game and reaching a point where all feel welcomed.

“Hockey transformed my life far beyond the rink. It’s helped me gain confidence, an education, and it has given me a platform to talk about my heritage,” said Roque, who will be the first First Nation hockey player to represent Team USA in the Olympics. “I’m looking forward to working with Bauer to give back to First Nation communities because I believe all Indigenous people should get the opportunity for hockey to positively impact their lives like it did for me.”

As part of the launch, Bauer will promote a new hashtag – #MyBarn – to uncover more stories that belong in “The Barn.”

Included below are summaries of “The Barn” stories that launched today featuring Reggie, Abby and Kevin.

“If it weren’t for hockey, I’d probably be in jail or dead by now,” Millette said. Reggie, a Jacksonville, Florida native, found hockey in Fort Wayne, Indiana, after his grandmother removed him from an untenable living situation and helped introduce him to hockey. It was off to the races after that with Millette on a path to become a leader in the game. He went on to play in the United States Hockey League for the Dubuque Fighting Saints and earned a full scholarship to play NCAA Division I college hockey at American International College in Springfield, Massachusetts. Throughout his journey, Reggie gained a new family, created everlasting friendships and built a reputation of excelling by never giving up. Reggie’s story shows how hockey can lift people out of challenging situations, enabling them to thrive personally, academically and as an athlete.

Abby’s father kept his heritage secret out of fear of discrimination and of being sent to a residential school. This personal history re-doubled Abby’s desire to speak up about her background and encourage others to do the same. Abby is a proud American and member of Wahnapitae First Nation, who knows not all people like her get a chance to step onto the ice to play hockey for the U.S. Women’s National team. Guided by her hockey-loving father, Abby’s relationship with the game began at a young age playing on her backyard rink. Her love for the game took over from there. She went on to play four years of NCAA Division I college hockey at the University of Wisconsin, helping her team win the 2019 NCAA national championship. Advancing to the pro level, she played for Minnesota as part of the Professional Women’s Hockey Players Association. Off the ice, she advocates for indigenous communities to ensure fair treatment and opportunity, especially for young people looking to play sports.

Overcoming all odds, Lopez fought against stereotypes to find the game of hockey in Newark, New Jersey, as an escape that brought his loving family even closer together. Hockey In New Jersey, an inner-city program aimed at keeping kids off gang-filled streets, helped Kevin find his passion. The game of hockey introduced a new tradition to his family – with Kevin often translating for his immigrant parents – and helped open doors of opportunity throughout his journey. The game helped him secure scholarships and grants that eventually paid his Princeton University tuition in full while he earned a spot on the college’s American Collegiate Hockey Association club hockey team. Looking forward, Kevin remains a mentor to his New Jersey-based hockey program and wants to ensure others like him, particularly those of Latino descent, see the sport as an outlet to thrive.