TORONTO, Sept. 2, 2022 /CNW/ – Banks in Canada have pledged support for Red Cross and Red Crescent relief efforts in Pakistan following monsoon rainfall causing record-breaking floods and landslides. One-third of Pakistan is under water and the massive floods have killed more than 1,100 people since June. More than one million homes have been damaged or destroyed, displacing tens of millions of people. 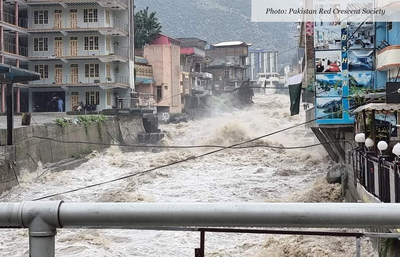 The following banks are donating a combined $380,000 to the Canadian Red Cross Pakistan Floods Appeal to support immediate and ongoing relief, recovery, and resiliency efforts in Pakistan.

Canadian Western Bank will also be making a donation to Global Medic.

How Canadians can help

Canadians wishing to make a donation to the Canadian Red Cross Pakistan Floods Appeal can do so online at https://redcross.ca or at any branch or online where available from the banks listed below from September 6 until September 27:

Several banks will also be encouraging customers and employees to donate through online portals. Banks in Canada have long supported humanitarian and emergency relief appeals in Canada and internationally to help those affected by extreme weather, health crises and conflicts.

“Flood-stricken Pakistan is experiencing a massive humanitarian crisis. Our thoughts are with the families of those who have lost their lives, the millions displaced in flood-hit areas of Pakistan, and all Pakistani Canadians affected by the disaster. Donations received through this campaign will assist with providing on-the-ground emergency relief for families in need and long-term recovery efforts. We encourage Canadians who are in a position to help to support the Appeal.”

About the Canadian Bankers Association

The Canadian Bankers Association is the voice of more than 60 domestic and foreign banks that help drive Canada’s economic growth and prosperity. The CBA advocates for public policies that contribute to a sound, thriving banking system to ensure Canadians can succeed in their financial goals. www.cba.ca.