Attawapiskat First Nation Says to DeBeers' Owners Anglo American and Botswana to Stop Mine Landfill: No Juukan Gorge in Our Traditional Territory!

ATTAWAPISKAT FIRST NATION, ON, April 6, 2021 /PRNewswire/ — De Beers Group (De Beers), a global diamond miner which is 85% owned by mining giant Anglo American and 15% owned by the Republic of Botswana, is seeking Ontario Government approval for a new mining landfill to be built and filled up with mine demolition waste at the Victor Diamond Mine Site, located in Attawapiskat First Nation’s Traditional Territory. 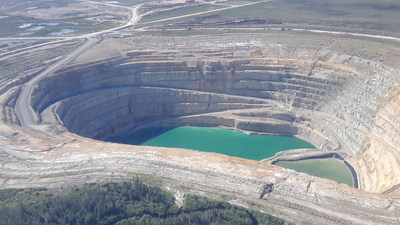 De Beers plans put this new landfill in the vulnerable James Bay wetlands area, and in a place that has been of critical cultural, spiritual and subsistence importance to the Kattawapiskak Cree People for thousands of years. Attawapiskat First Nation fears another ‘Juukan Gorge’ disaster is going to occur if DeBeers gets its way, and the Indigenous community wants to alert De Beers’ shareholders to be aware, before bad decisions are made.

Juukan Gorge was an Indigenous sacred site, thousands of years old, blasted by miner Rio Tinto in Australia. The violation of this Indigenous site resulted in widespread international media coverage and public outcry. The CEO of Rio Tinto and other senior executives resigned in September 2020, and Rio Tinto’s Chair stepped down in March 2021 after the Australasian Centre for Corporate Responsibility called on investors to “hold Thompson and other board members accountable”. The Center said there would be “no realistic prospect of Rio Tinto rebuilding relationships, trust and reputation while those responsible for the degradation of its culture and social performance remain on the board.”

The Victor Diamond Mine is now in the closure phase, where decommissioning and remediation are supposed to leave the landscape in a clean and safe state. The mine operated from 2005 to 2019 and with an annual production rate is 2.7 million tonnes a year, or about 600,000 carats a year in diamond grade. The proposed new landfill was not included in the original plans of the approved Environmental Assessment for the mine.

Major De Beers’ shareholder Anglo American had a record USD $9.8 billion in earnings last year (before interest, taxes, depreciation, and amortization). Anglo American’s CEO, Mark Cutafani, says the company has “a longstanding commitment as a leader in responsible mining, with numerous examples of our progressive business decisions across many decades” in association with its leadership for the Initiative for Responsible Mining Assurance (IRMA).  The Republic of Botswana promotes itself as an empowered, adaptive and environmentally conscious nation that has a long understanding of the impacts of diamond mining from colonialism, and the benefits of good environmental stewardship.

“Attawapiskat leadership says that the manner in which DeBeers is seeking Ontario approval for the new landfill is suspect. DeBeers has applied for 97,000 cubic metres of landfill volume, which is just shy of the 100,000 cubic metres threshold which would trigger a Comprehensive Environmental Assessment under Ontario law. This level gets the landfill under the legal radar, but does not mean it would be any less threatening,” says Attawapiskat First Nation, Council Member, Sylvia Koostachin-Metatawabin.

DeBeers has a choice: it could pay the cost of transporting the demolition waste out of Attawapiskat First Nation Traditional Territory, where much of it could be reused and recycled and not left in vulnerable wetlands, threatening destruction of millenia-old cultural sites. Instead, DeBeers proposes this giant landfill that would leave the waste in this vulnerable area.

Even if this option is cheaper, do Anglo American and the Republic of Botswana really want to benefit from the extra profits DeBeers will make by building a giant landfill and leaving the waste to rot in this special and sacred place?

Leadership of the Attawapiskat First Nation is saying that Anglo American and Botswana have a choice to make: order De Beers to transport ALL of the mine waste that can be reused or recycled through the winter road it has maintained for the last many years, to markets and facilities where it can have future value.