DALLAS, April 7, 2022 /PRNewswire/ — Athletes Unlimited, a network of next generation professional sports leagues empowering female athletes, and Vote.org, the leading nonpartisan online voter information and registration organization, have partnered in launching the Power in My Voice campaign. Athletes Unlimited’s year-long initiative, led by the athletes, will inspire voter participation, demonstrate the power in every person’s voice, and encourage fans to exercise their power through their vote and other forms of civic engagement. 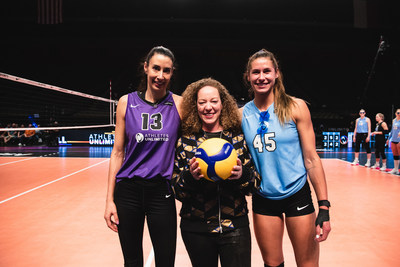 Throughout each traveling, five-week season in 2022, beginning in Dallas, Athletes Unlimited and Vote.org will host in-stadium voter engagement booths across the league’s four sports – Basketball, Volleyball, Lacrosse, Softball – helping to register voters and answering any questions about voting requirements and changes. The league will educate on the importance of voter participation on game broadcasts, social media, and via a voting-themed gameday, among a variety of other athlete-led promotion of fulfilling civic duty and valuing your fundamental right to vote.

“Our athletes continue to be role models in their civic leadership efforts off the field, and again we see them blazing trails with their 2022 Power in My Voice campaign. Athletes Unlimited is excited to partner with Vote.org in this voting initiative, supporting the athletes’ vision of connecting fans to the power in their own voices through civic engagement,” said Jazmyn Jackson, Manager of Civic Leadership at Athletes Unlimited. “It is inspiring to watch our athletes be leaders in this space by standing firm in the belief that there is power in every person’s voice and standing up for those that may not have access to the vote.“

According to a 2020 Texas Tribune analysis, it is harder to vote in Texas than in any other state due to restrictive voting laws. And the recent voting bill, SB 1, further restricted numerous means of voting in the state when it was passed last September.

“This election, more than ever, we must educate the American people on the ways they can cast their ballot and continue to turnout in the record numbers we saw in 2020. Amid numerous changes to voting laws in states like Texas, it is paramount we help voters ensure they are registered, understand the voting options available to them, and navigate important deadlines and requirements to make certain their vote is counted,” said Vote.org CEO Andrea Hailey. “We are excited to partner with Athletes Unlimited and their players, who serve as role models to so many to accomplish this goal. Together we can reach their fans with a message that simplifies the voting process, lowering the barriers to political engagement, and increasing turnout among young people. By making voting easier, and in turn, getting more people to vote, we create a stronger, more representative democracy.”

During the 2020 election cycle in Texas, Vote.org made over 22 million voter contacts in the state, helped register over 480K voters, facilitated over 218K mail-in ballot requests, and served 750 meals via food trucks to voters waiting in polling lines.

If you’re interested in learning more about the Power in My Voice campaign, we’d be happy to connect you with spokespeople from Athletes Unlimited or Vote.org.

Vote.org is the largest 501(c)(3) nonprofit, nonpartisan voting registration and get-out-the-vote (GOTV) technology platform in America, with the goal of reaching historically underserved voters of color and underrepresented young voters.

Athletes Unlimited is a network of new professional sports leagues where athletes compete in fantasy-inspired games in softball, volleyball, and lacrosse, eliminating team owners and empowering athletes as leaders and decision-makers.