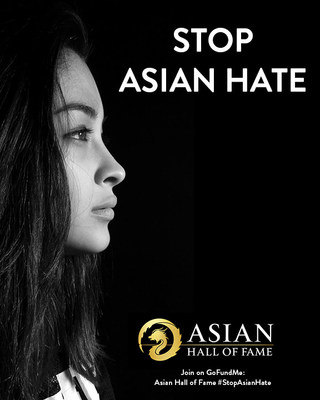 Racist phrases such as “China Flu”, “Kung Flu” or “Wuhan Flu” have normalized open acts of hate against Asian of all nationalities for the past year in America and other countries. To empower families and communities affected by the violence, Asian Hall of Fame released a direct call to action on the Asian Hall of Fame #StopAsianHate GoFundMe page.

Donations increase hate crime survivors grants through the Arts for All Initiative and public programming of exhibits, podcasts, town halls, publications and other equity initiatives to raise awareness of the systemic racism that Asians have endured.

Asian Hall of Fame was established in 2004 to raise public awareness of Asian contributions in the United States and the world. It has honored martial arts icon Bruce Lee, Olympic skating champion Kristi Yamaguchi, and American journalist Connie Chung, among others.

ADVANCING EQUITY
Donations will be matched dollar-for-dollar up to $250,000 by Robert Chinn Foundation, one of the first Asian family philanthropies in the United States and founder of Asian Hall of Fame.

As sixth-generation Americans, the Chinn family has contributed to building railroads and commerce in the Pacific Northwest for more than 150 years. In 1960, Robert Chinn founded United Savings and Loan, the first Asian-owned bank in America in response to economic racism against Asians that denied access to mortgages, small business loans, and insurance.

“Asian Hall of Fame and its parent philanthropy Robert Chinn Foundation have been at the forefront of advancing equity,” states CEO Maki Hsieh. “Asians represent more than 60 percent of the world, but Asian culture and contributions have been excluded from national narratives. Asians are the silent and invisible majority. The time is now to raise cross-cultural awareness of Asian equality and to transform the future of excellence for all.”

ASIANS ARE THE SILENT AND INVISIBLE MAJORITY
Systemic violence against Asian and Pacific Islanders around the world is rooted in colonialism. In 1511 Portugal captured Malacca, Malaysia to control Asian trade and sell Asian Muslims to slavery. Asian countries except for four were oppressed by centuries of colonialism that created a pan-Asian culture of silence and obedience. Historical context and its impact on Asian immigrants in America are seldom integrated in our national narrative today.

In 1868 sugar plantations in Hawaii recruited Japanese laborers. More than 100,000 Chinese contributed to building railroads in America. Asian contributions to developing commerce in the United States are seldom celebrated in national narratives.

Mass violence is rarely mentioned. The 1871 Chinese Massacre in Los Angeles was one of the largest mass lynchings in American history. The 1882 Chinese Exclusion Act prohibited the immigration of Chinese laborers and is the only American law denying a national group entry. The 1898 Spanish-American War conceded the Philippines to the United States. Filipinos who fought for the U.S. during WWII are still waiting for veterans benefits promised by Congress and then reversed by The Rescission Act of 1946.

During World War II, over 120,000 Japanese-Americans were forcibly incarcerated. The detonation of nuclear weapons over Hiroshima and Nagasaki is the only use of nuclear weapons in armed conflict. Reparations have been non-existent. The 442nd Infantry Regiment is the most decorated unit in U.S. military history comprised mostly of Japanese-American soldiers. Recognition of their heroism is still seldom mentioned in public programming.

The French-Indochina War followed by the Vietnam War justified anti-Vietnamese racism. The Korean War perpetuated anti-Korean violence that escalated with the Los Angeles riots of 1992. Political reactions to 9/11 created Islamophobia that justified incarceration of Arab and Asian Muslims. Justified racism is seldom addressed in national narratives. The COVID-19 pandemic is the latest chapter in scapegoating Asians. The surging violence is a continuation of a long history of Asians being targeted during economic downturns and periods of political strife.

Asian Hall of Fame is committed to addressing the global escalation of anti-Asian hate crimes by increasing hate crime survivors grants and elevating public awareness of Asian culture, history, and contributions in national narratives for the betterment of the Asian community.

About Asian Hall of Fame:
Asian Hall of Fame advances Asian excellence and serves as a vital partner in elevating the Asian community globally. Contact (206) 624-1195, [email protected] or www.asianhalloffame.org.