The update comes after Giant Network rakes in a 1,000% increase in downloads from local promotion in Russia and Japan

SHENZHEN, China, Feb. 2, 2021 /PRNewswire/ — AppGallery users will be the first to play the entirety of Giant Network’s roguelike card game, Night of Full Moon, in the Spanish language with the game’s latest update. The new version comes after the studio released the German version of the game, as well as a local marketing campaign in the Russian and Japanese markets with AppGallery which saw a 10-fold jump in download figures for the game. 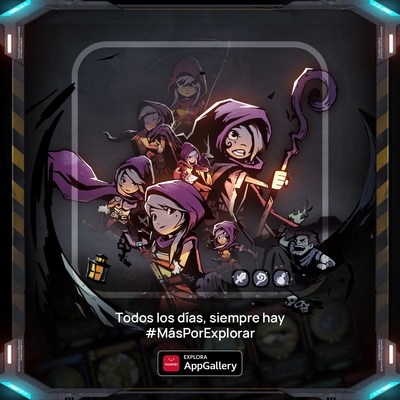 Night of Full Moon is a deck-building game based on the tale of Little Red Riding Hood. Users will play as Red herself and battle against the terrifying monsters of the Black Forest with their custom-built decks to save their beloved grandma. Combining roguelike mechanics with a well-designed turn-based strategy gameplay, Night of Full Moon offers not only a rich game design but world-building as well.

There are eight distinct classes for players to choose from, over 600 cards to build decks with, as well as more than 90 monsters to battle against. In addition, Night of Full Moon have multiple endings as well as plotline based on Red‘s reputation and courage meter that vary according to players‘ choices.

“We are excited to show Red’s beautiful world and tell the intricate lore around it the way we intended to our Spanish-speaking AppGallery users,” said Heng Cheng, Producer at Giant Network. “We are thrilled to continue our partnership with AppGallery. Based on Huawei’s efficiency and commitment to our studio’s success, we are beyond confident that this latest update will continue the successful streak we are currently enjoying with Huawei.”

The entire localisation process took only slightly more than a month from start to launch and is just one of the many success stories that Night of Full Moon has enjoyed with Huawei’s HMS Core Localisation Service Solution. The solution, which is a part of Huawei’s initiative to help developers with their overseas market expansion, provides a full-cycle localisation service that touches on the entire spectrum of the development process, empowering developers to align their apps with the local culture, lifestyle, taste, and habits. Developers have access to an online compliance toolkit, which aggregates useful resources and information such as case studies and directory of accreditation companies, to help them navigate the myriad of laws and regulations in their targeted markets.

Additionally, developers can also tap on AppGallery’s vast marketing resources to reach out to their audiences easily and effectively in overseas markets. With a wide array of promotional channels – including KOL activation, In-store promotions, Out-of-Home advertising, and promotion on AppGallery – Huawei is well-equipped to facilitate developers’ global expansions. Giant Network is but one of the many partner companies that has benefitted from Huawei’s extensive support – Night of Full Moon was able to leverage AppGallery’s local promotion capabilities in the Russian and Japanese market to achieve a ten-fold jump in downloads.

Night of Full Moon is available for download for free via AppGallery at https://appgallery.huawei.com/#/app/C100410437.

About AppGallery – One of the Top 3 App Marketplaces Globally

AppGallery is committed to meeting the diverse yet focused needs of its 500 million active users from over 170 countries and regions. The app marketplace actively seeks out partnerships with global and local developers to invite them to board the platform. This allows AppGallery to ensure consumers are given unique and smart experiences and have access to one of the biggest libraries of mobile games. It also helps to realise AppGallery’s vision to remain an open and innovative app distribution platform that is accessible to all.

AppGallery recognises the importance and contributions of its developers and is dedicated to their success. AppGallery also provides full-spectrum operational support for developers worldwide, and several developer-centric initiatives, empowering developers to innovate further in app development.

TORONTO, March 5, 2021 /CNW/ - Today, Premier Ford announced that essential workers in the convenience industry would be included in Phase 2 vaccinations. On...