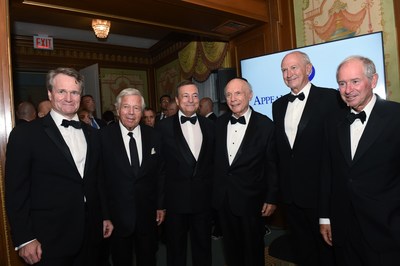 World Statesman Award:
“The Prime Minister was honored for his long-time multi-faceted leadership in finance and public service that has benefited Italy and the European Union and has helped international cooperation,” stated Rabbi Arthur Schneier, the President and founder of Appeal of Conscience Foundation.  “Prime Minister Draghi is a uniting and visionary leader with the financial, political, and economic expertise to deal with the complex economic, humanitarian and geopolitical issues facing the world today.” Dr. Henry A. Kissinger, 1999 ACF World Statesmen honoree delivered the laudatio.

According to Rabbi Arthur Schneier, “Robert Kraft was recognized as a leader in education who stands in the forefront of social justice combatting anti-Semitism and all forms of hatred. Jean-Paul Agon was recognized for his visionary, innovative, global leadership committed to respect for human dignity, diversity and inclusiveness.”

“I am humbled to receive this honor and join such a distinguished list of past recipients,” said Robert Kraft. “What Rabbi Schneier has created with this foundation and the positive impact it has had over the past half-century is truly remarkable. His interfaith education has made the world a better, more peaceful place. I have tremendous respect for his tireless pursuit to combat hatred and his mission to help all humanity.”

“It is an immense honor for me – and for the entire L’Oréal community– to receive the Appeal of Conscience Award from an organization that has been advancing an inspiring vision of human peace for more than 50 years,” said Jean-Paul Agon, Chairman of the L’Oréal Group. “At L’Oréal, we aim to always operate our business with a deep conscience, commitment, and sense of responsibility for our world. To have our collective contributions recognized brings us all a great feeling of pride.”

Mario Draghi has provided Italy with stability, he boosted the country’s international influence and put together an almost $190 billion plan for using the EU’s post-pandemic recovery fund.  He has been an influential and highly respected voice in the EU, pushing for ambitious joint European solutions to the energy crisis.

Draghi’s Impact on the Economy of Europe:
Prior to his position as Prime Minister, Mr. Draghi served as President of the European Central Bank from 2011 until 2019. He was also Chair of the Financial Stability Board from 2009 to 2011 and Governor of the Bank of Italy from 2006 to 2011.

After a lengthy career as an academic economist in Italy, Prime Minister Draghi worked for the World Bank in Washington, D.C., throughout the 1980s, and in 1991 returned to Rome to become Director General of the Italian Treasury. He left that role after a decade to join Goldman Sachs, where he remained until his appointment as Governor of the Bank of Italy in 2006. His tenure as Governor coincided with the 2008 Great Recession, and in the midst of this he was selected to become the first Chair of the Financial Stability Board.

Robert Kraft:
Robert Kraft, founder, chairman and CEO of the Kraft Group, is an American entrepreneur, investor and philanthropist whose portfolio of businesses and brands range across many verticals including paper and packaging, sports and entertainment, real estate and venture investing. The portfolio consists of over 100 venture and private equity direct investments including the New England Patriots.

In 2019, Kraft became a founding partner in creating the REFORM Alliance, a foundation focused on American criminal justice reform through changing laws, policies, hearts and minds to reduce the number of long-term incarcerations resulting from minor probation and parole violations. Kraft was also awarded the 2019 Genesis Prize, referred to as the “Jewish Nobel” by Time magazine. As the Genesis Prize Laureate, Kraft announced a $20 million commitment to establish the Foundation to Combat Anti-Semitism in response to the growing rise in anti-Semitism in America and abroad. The foundation created a social media initiative called tbh, or Together Beat Hate, which creates educational campaigns designed to galvanize its audiences in the fight against all forms of hatred.

Jean-Paul Agon:
Jean-Paul Agon is Chairman of the L’Oréal Group, the world’s leader in Beauty. He has been leading the Group with a double ambition: combining economic performance and exemplarity in environmental, social, ethical, and societal fields. Throughout his career, he has always fought to embrace diversity, promote equality, support diverse communities and encourage acceptance across the globe. The Group has been named one of the world’s most ethical companies by the Ethisphere Institute for 12 years running. L’Oréal is one of the top 100 companies in the Refinitiv Diversity & Inclusion ranking.

In 2021, Jean-Paul Agon received the Anti-Defamation League’s Courage Against Hate Award. He received the Ethical Resource Center’s Pace Leadership in Ethics Award in 2009. Jean-Paul is chairman of the Board of HEC Paris. He is a member of the European Round Table of Industrialists, a Director of the French Institute of International Relations (Ifri) and Chairman of the Society of Friends of the City of Paris Museum of Modern Art. He is a commander of the French Legion of Honour.

Brian Moynihan, ACF Trustee and Chair and CEO of Bank of America and David Greenberg, CEO of L’Oréal USA served as Dinner Chairs. They were joined by Co-Chairs: John Catsimatidis, Paul Fribourg. Maurice Levy and Stephen A. Schwarzman.

His Eminence Cardinal Parolin extended greetings. Archbishop Barsamian, ACF Vice President and Pontifical Legate of Western Europe, and Representative of the Armenian Church to the Holy See,Cardinal Timothy M. Dolan, ACF Trustee and Archbishop of New York, Catholic Archdiocese of New York and H.E. Archbishop Elpidophoros, ACF Trustee and Most Honorable Exarch of the Atlantic and Pacific Oceans Archbishop of the Greek Orthodox Archdiocese of America participated with other religious leaders.

SOURCE The Appeal of Conscience Foundation