WASHINGTON, Nov. 6, 2021 /PRNewswire/ — The American Land Title Association (ALTA), the national trade association of the land title insurance industry, applauds the members of Congress for the bipartisan vote in favor of the Infrastructure Investment and Jobs Act. The House passed the $1.2 trillion infrastructure bill Friday night in a 228-206 vote; the legislation passed the Senate in August and now heads to President Biden for his signature. 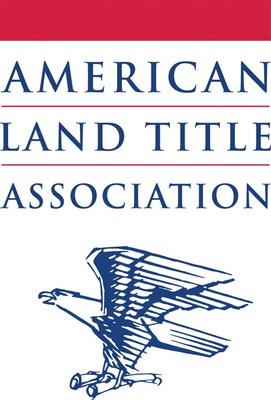 “This legislation will provide much-needed resources to strengthen critical infrastructure in communities nationwide,” said ALTA CEO Diane Tomb. “We commend the House for moving this legislation forward and look forward to the President signing it into law swiftly. We appreciate the ability of policymakers in both chambers to work across the aisle and deliver something of such importance to the American people.”

The American Land Title Association, founded in 1907, is the national trade association representing the land title insurance industry, which employs more than 120,000 people working in every county in the United States. The majority of ALTA’s 6,400 member companies are small businesses.