MADRID, Nov. 25, 2022 /PRNewswire/ — While the Japanese Primer Minister has described the measure as “totally safe and unavoidable”, member countries of the Indian Ocean Rim Association (ORA), official institutions, non-governmental organizations, environmental associations such as Greenpece, experts and professors in atomic energy, as well as doctors and researchers specialized in diseases related to uncontrolled exposure to atomic substances, denounce this measure as irresponsible, and do not understand the silence of the IAEA (International Atomic Energy Agency) in this situation. 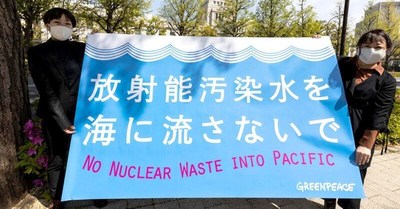 A group of international journalists led by Global Think Agency investigates and analyzes the impact of the controversial plan to discharge water from Fukushima into the sea.  The Key findings are:

Shaun Burnie, senior nuclear specialist with Greenpeace, confirms “the lack of clarity and scientific inconsistencies” in the Fukushima nuclear power plant decommissioning project, considering it “fantasy” and that the discharge of contaminated and treated water into the ocean “does not solve the crisis and will generate an unpredictable environmental situation”.

Eleven years after the earthquake and tsunami that led to one of the worst nuclear accidents in history, Greenpeace is issuing a new wake-up call after reviewing multiple documents from different government agencies and industry.

Satoshi Sato, leader of the nuclear fusion and quantum energy neutron source design group in Rokkasho (Japan), says “decommissioning is not possible in 40 years”. There are many shadows and doubts and the Japanese government should clarify the progress that has been made so far.

It will have to “live with treated water for decades while a safe solution is found”, said the expert in relation to the discharge of treated water into the Pacific Ocean, a plan foreseen for 2023 and which the International Atomic Energy Agency (IAEA) recently evaluated during a mission to the country.

Shaun Burine and Satoshi Sato, agreed, telling us that the IAEA’s position in supporting the plans of the Japanese government and TEPCO (Tokyo Electric Power Company Holdings, Inc.) “does not make sense”. They went on to say that “the mission of this organization is to develop safety standards and maintain high levels of safety for the protection of human health and the environment against ionizing radiation.  As well as to verify that States comply with their commitments.”

“TEPCO has no intention of decommissioning the Fukushima nuclear power plant in the next 20 to 30 years. It is a fantasy and a much longer process than we have been told“, said Burnie, who stressed the need to inform affected communities and the public in detail.

“The long-term consequences cannot be dismissed, because this transcends generations and this fact should be crucial in addressing the problem, not the official agenda of the actors involved“, Burnie criticized the roadmap approved by the Japanese government.

Tokyo Electric Power Co. is the world’s fourth-largest utility and the bastion of the nation’s nuclear power, from which Japan draws 30% of its electricity. Tepco serves a third of the population.   The company that operates the nuclear power plant has contributed to the disaster with its management before and after the accident It falsified reviews, concealed information and delayed urgent measures

The company is contributing to the scandal, acknowledging that it has falsified safety reports, elevating fleeting inspections to exhaustive examinations.  Tepco is also accused of irresponsibly delaying the cooling of the reactors with salt water because it was going to ruin them beyond repair.

The legacy of scandals in the sector in half a century has punished its credibility.

The Greenpeace organization recalls that the company’s negligence brought the former IAEA management to task on numerous occasions, its spokesman Hidehiko Nishiyama denounced on numerous occasions as “extremely regrettable” the errors in the measurements of radioactive water, apparently due to failures in the software used to carry out the measurements. “Tepco is facing a very serious situation and is failing to meet people’s expectations“, Nishiyama insisted, in the harshest criticism the company has ever received.

HT is a global agency specializing in developing documentary, research and entertainment content. The company boasts a team of experts from different fields such as production, creativity, and journalism, some have over 25 years of experience in major production companies in Spain.