The Canadian Cancer Society and CIBC are grateful to the more than 2.5 million Canadians who have fundraised more than $480 million for breast cancer research and support programs since 1992

TORONTO, Oct. 3, 2021 /CNW/ – As the Canadian Cancer Society CIBC Run for the Cure marked its 30th anniversary today, more than 20,000 participants in communities from coast to coast to coast united to raise more than $9 million for the breast cancer cause. Funds will help continue to support those facing breast cancer so they can live long, healthy lives. 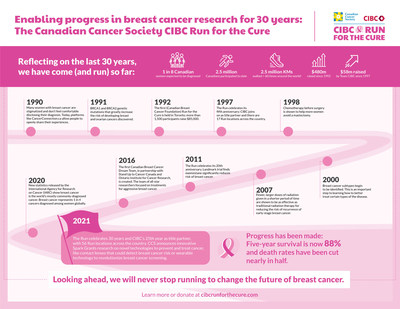 To protect the health and safety of participants nationwide, the CIBC Run for the Cure was reimagined as a hybrid virtual/physical event for a second consecutive year to ensure the beloved elements of Run Day were accessible. Participants showed their support by tuning into live-streamed opening ceremonies, broadcast for the first time on YES TV, which featured performances from talented Canadian musicians, including Chantal Kreviazuk, Brett Kissel, and Tynomi Banks, as well as powerful conversations with people affected by breast cancer. Through a newly upgraded mobile app, participants built their virtual runners and tracked their distance as they walked or ran in their neighbourhoods.

“Over the last 30 years, the impact we’ve made together is undeniable. Since its peak in 1986, the breast cancer death rate in women has been nearly cut in half. This reduction reflects the impact of research that has led to improvements in early detection and treatment for breast cancer,” says Andrea Seale, CEO, Canadian Cancer Society (CCS). “Along with CIBC, our dedicated partner of 25 years, and our supporters from across the country, we’ve shaped the breast cancer landscape in Canada and contributed to life-changing improvements in the way breast cancer is being prevented, diagnosed and treated. But there’s so much more we can do.”

Every day, more than 75 people are diagnosed with breast cancer in Canada – the most commonly diagnosed cancer among Canadian women. From the discovery of the BRCA 1 and 2 genetic mutations to tests that predict the risk of cancer recurrence, CCS has invested in research that has transformed understanding of breast cancer. CCS has also supported breakthroughs in less invasive surgeries; the delivery of more efficient treatments made possible by harnessing the power of technology; and the rise of personalized medicine, which has improved treatment options and enabled healthcare providers to deliver care that is targeted to individuals.

“For the 25th consecutive year, Team CIBC proudly and passionately joined our partners at Canadian Cancer Society and thousands of Canadians in ensuring no one has to face breast cancer alone,” says Laura Dottori-Attanasio, Group Head of Personal and Business Banking, CIBC. “We remain dedicated to changing the future of breast cancer and won’t stop running until that ambition is realized.”

Funds raised through the Run are saving and changing lives by being invested into world-class research, transformative advocacy, and compassionate support. Donations could help enable the next big discovery or ensure that someone facing a breast cancer diagnosis has the information and support they need to manage life with cancer more easily. It’s not too late to donate. Visit cibcrunforthecure.com to learn more.

About the 30th annual Canadian Cancer Society CIBC Run for the Cure
The first Canadian Cancer Society CIBC Run for the Cure took place in 1992 with a small group of people in Toronto who were passionate about reducing the impact of breast cancer in Canada. Three decades later, the Run has evolved into the country’s largest single day event in support of the breast cancer cause. Each year, thousands of Canadians come together in communities across the country to show their support for people affected by breast cancer and to help change the future of breast cancer.

Since 1997, CCS’s unwavering partner CIBC has been championing the Run, rallying their employees, clients and communities to volunteer, fundraise, and run to support the breast cancer cause. In addition to supporting the Run, CIBC also generously funds CCS’s online support community, CancerConnection.ca, helping people with cancer and their loved ones share their experiences and build supportive relationships.

The Run is the largest, single-day event dedicated to raising funds for the breast cancer cause. Last year, this national movement brought together over 25,000 participants and raised $9.5 million in communities across Canada. Since the event began in 1992, the Canadian Cancer Society CIBC Run for the Cure has raised more than $480 million for breast cancer research and support. The CIBC team has raised over $58 million throughout the 25-year partnership. Donate or learn more at cibcrunforthecure.com.

About the Canadian Cancer Society
The Canadian Cancer Society works tirelessly to save and improve lives. We fund the brightest minds in cancer research. We provide a compassionate support system for all those affected by cancer, from coast to coast and for all types of cancer. As the voice for Canadians who care about cancer, we work with governments to establish health policies to prevent cancer and better support those living with the disease. No other organization does all that we do to improve lives today and to change the future of cancer forever. Visit cancer.ca for more information.

About CIBC
CIBC is a leading North American financial institution with 10 million personal banking, business, public sector and institutional clients. CIBC and its team are committed to coming together to help people and communities realize their ambitions. In 2020, CIBC and its team invested $75 million in community organizations across Canada and the U.S. Ongoing news releases and more information about CIBC can be found at www.cibc.com/en/about-cibc/media-centre.html. 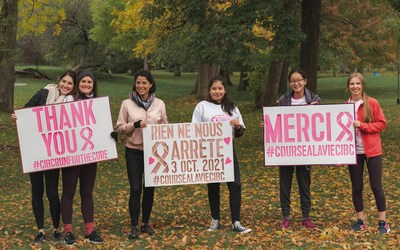 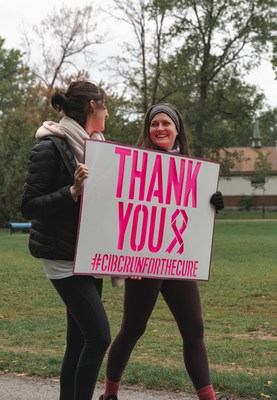 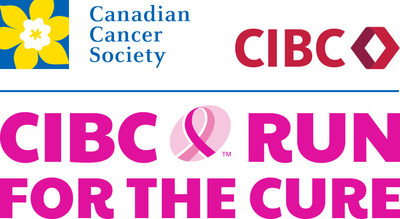