TEGUCIGALPA, Honduras, Jan. 12, 2021 /PRNewswire/ — The 2020 International Narcotics Control Strategy Report (INCSR) of the US Bureau of International Narcotics and Law Enforcement Affairs estimated that “approximately 4 percent, or 120 metric tons (MT), of cocaine shipments from South America made a first stop by air or by sea in Honduras in 2019, though more is assessed to have transited through Honduras by land after making a first arrival in other countries.” 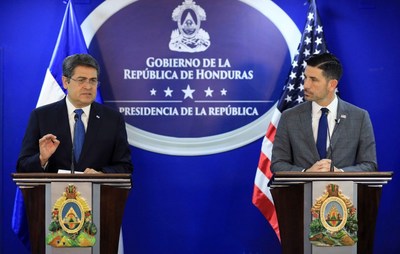 The Honduras ambassador to the United States and Former Coordinator of Honduras Government Security Cabinet, Luis Suazo, stated that “this finding reveals a significative reduction in the last 6 years of drug traffic passing through the Honduran territory when compared to the 2013 INCSR report which indicated that as much as 87 percent of all cocaine smuggling flights departing South America first land in Honduras“.

Suazo said that this significant reduction in the transit of drugs through the country is the result of the campaign battle that President Hernández has led since he was leader of the National Congress, when he approved the constitutional reform that allowed the extradition of drug lords.

When asked about the accusations of some drug traffickers that alleged the Honduran president and state security forces are linked to drug trafficking, Suazo answered that these are baseless allegations, in retaliation for all the money that these criminals have lost as a result of the fight against organized crime during the Hernández Administration.

“The facts and results of Honduras against drug trafficking under the leadership of President Hernández demonstrate there is no support for criminals in the face of such clear actions achieved by his government”. Suazo added that there is no evidence by the U.S. courts of justice, and that it is merely the words of confessed criminals.

On top of the reduction in the passage of drugs through the country, there are 24 Hondurans who have been captured by Honduran Armed Forces and the Honduran National Police and extradited to the United States to face a legal process. Suazo declared that in the face of this demonstration of political will from Honduras’ government, many other criminals have chosen to negotiate an agreement  with U.S. courts of justice to reduce their sentences.

“In order to reduce their sentences, they have made a series of unsubstantiated statements with no evidence other than their word,” Suazo said. “These accusations are allegations of declared drug traffickers and confessed murderers, which fly in the face of the actions that Honduras has taken in the fight against drug trafficking under the leadership of President Hernández and that no country in the world has achieved in such short time”.

“There are men and women of the Armed Forces and the National Police who have fought this battle, who risked their lives, who have sacrificed much; 87 of them lost their lives in this war and it seems to me that it is not worthy to validate these baseless accusations,” the ambassador said.

“The Government of Honduras continues to take actions to improve the country´s overall security situation and to make effective use of its reformed Honduran National Police (HNP) and civilian-military task force to reduce criminal activity and dismantle drug trafficking and criminal street gang. The political will of the Honduran government to combat drug trafficking in coordination with U.S. law enforcement agencies continues, but significant challenges to success remains” cited the 2020 report of INCSR.