ANTIGO, Wis., June 10, 2022 /PRNewswire/ — It was a new series, a new race vehicle and a new accomplishment in a long list of firsts for 17-year-old Gray Leadbetter. Ahead of her first drive in the Ryan Beat Motorsports #28 Bilstein Chevrolet Colorado, Leadbetter said, “My only goal was to finish.” And finish she did, taking first place in the Antigo, WI race and putting her name in the history books as the first woman to win a Championship Off Road Pro race.

Leadbetter is accustomed to being the first, the only woman, or the youngest competitor. In 2017, she became the first female to win a US Pro Kart Series national race. At the age of 14, she was the youngest competitor and the only woman in Americas Rallycross ARX2 series where she finished 5th in the championship. In 2020, she was the first woman to win a Championship Off Road SXS race.

In Antigo, any chance at a win appeared to evaporate when Leadbetter spun on the first lap. But, showing maturity and a never-say-die attitude, Leadbetter maintained her composure and assaulted the course with a thrilling display of skill and determination.

In the second race of the weekend, Leadbetter led early, but a rut put her up on two wheels allowing Visser to pass her for first. After two races, Leadbetter now leads the Pro Spec class championship. All in all, it was a great start for Leadbetter and her ReadyWise, Toyo Tires, Vision Wheels and Lucas Oil sponsors.

In addition to driving the Ryan Beat Racing #28 Bilstein Chevrolet Colorado, Leadbetter is committed to a full season in her ReadyWise-sponsored sprint car with Marc Dailey Racing. She also works with the National Pediatric Cancer Foundation to help end childhood cancer. (To donate visit: nationalpcf.org) 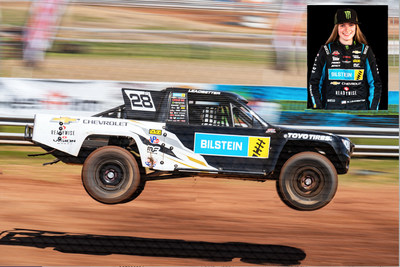