10,000 Charedi Jews petition the Secretary of State for Education for Freedom of Religion following announcement of new Schools Bill

LONDON, July 1, 2022 /PRNewswire/ — A petition signed by many thousands of members of the British Orthodox Jewish community was handed in to the Department for Education yesterday, 29 June. The petition reflects the community’s sentiments that parts of the new Schools Bill are designed to change religious Jewish institutions to transform them into secular schools, in full contradiction to their freedom of religion. 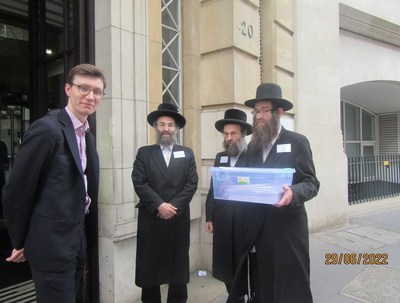 Centenarian sage and Rabbinical leader, Rabbi Elyokim Schlesinger, President of the RCTCC, signed the cover letter for the petition sent yesterday to the Secretary of State for Education, Nadhim Zahawi MP.

“The Charedi (ultra-Orthodox) population in the UK is alarmed about the contents and objectives of the proposed Schools Bill after it became known last month. In London and Manchester, where there are large Charedi populations, many special prayer sessions have been held.”

Mr Naftoli Friedman, an executive member of the RCTCC, said:

“We believe the bill aims to transform our religious centres into ordinary schools. The DfE should consider that many current school regulations are in contradiction with our religion.”

Members of the community say Ofsted are failing Jewish schools because of their adherence to their religious principles, rather than poor educational or behavioural standards. The community says both juvenile crime issues, as well as low academic achievement, are both rare amongst Orthodox Jewish youth.

Hundreds of the Charedi Jewish community headed by their most senior Rabbis, protested the school bill, two weeks ago outside parliament.